As I've shared my recent spate of painting adventures online, the inevitable question has popped up as to what the style is called.  I honestly have no idea.  The word that pops up for me is whimsical when thinking about the style.  It is substantially less precise than the work I did when I was younger, drawings that required intense amounts of time and detail.  While there is an element of precision - especially in the early stages of the process, sketching out the subject and ensuring proportions are correct - overall it is a fly-by-the-seat-of-my-pants, pick the colour that calls to me type of thing.

The paintings that I've done over the past few years were inspired by an artist in Calgary named Mandy Stobo.  She has been working on a series of "Bad Portraits" that have just taken off.  Her concept of creating fast and with a whole lot of forgiveness really struck me.  You can see her work by clicking here. 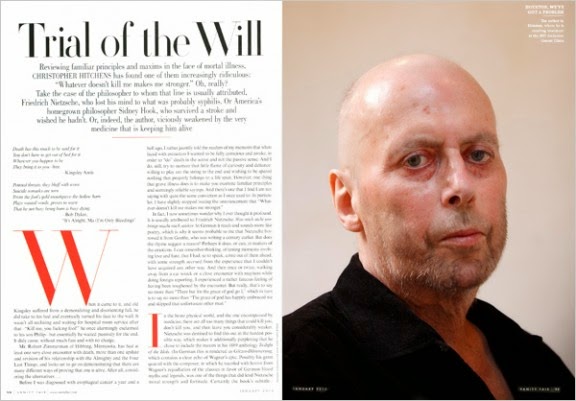 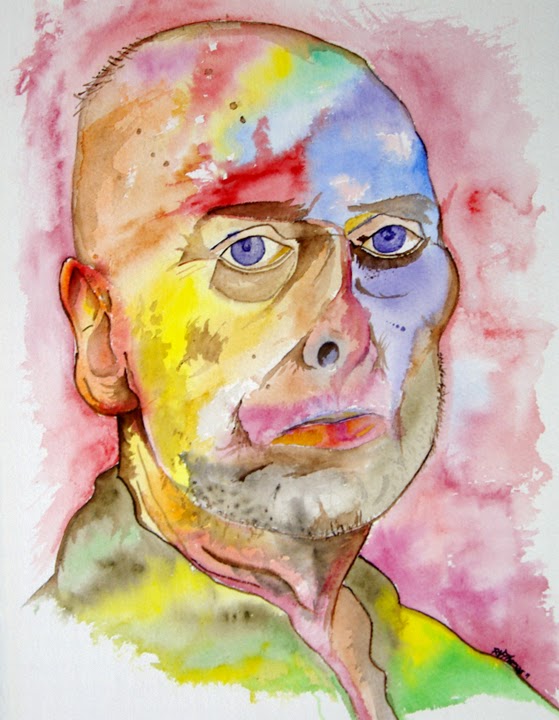 This journey began innocently enough with a portrait of Christopher Hitchen, the irascible yet brilliant Vanity Fair columnist and author painted shortly after he died.  It was the catalyst, the key to the dozens of watercolour portraits that followed including these: 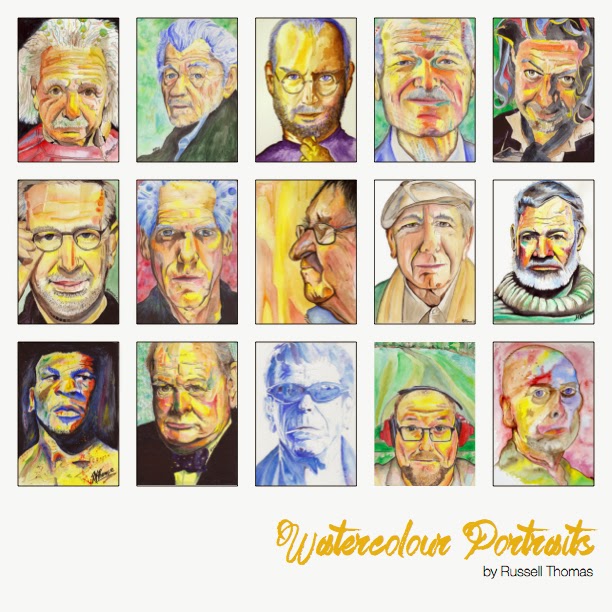 Then there was a lull, a long period of nothing, until I discovered that my shed had been tagged.  It triggered something in my brain that then signalled me to create a canvas on the wall that faced the back alley.  As soon as I did, a portrait of Elsie Yanik taken by Joey Podlubny at the Oilsands Banquet was the first thing that popped into my mind. 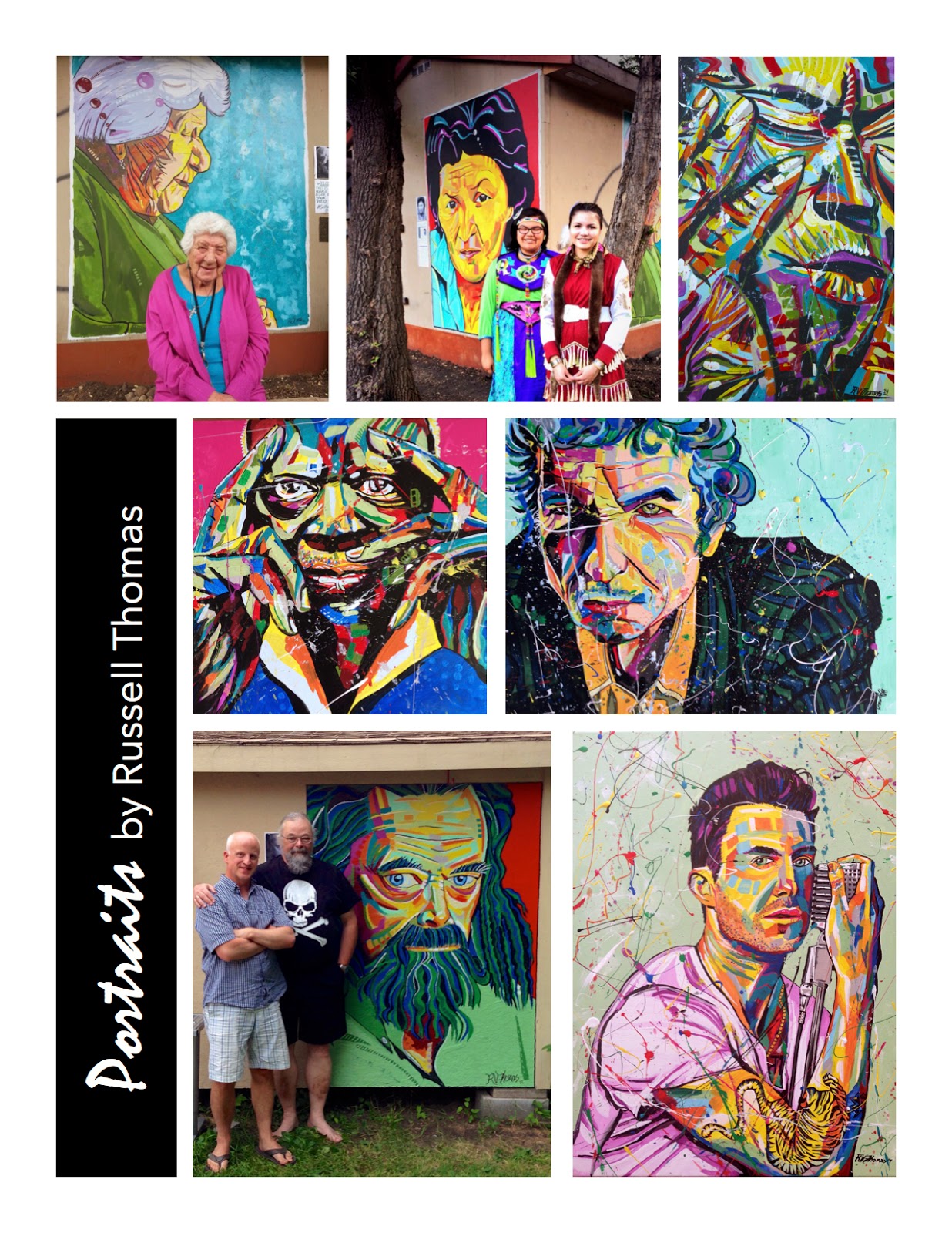 What followed has been remarkable, three murals, and five smaller acrylic portraits, and requests to paint portraits of famous musicians and actors, families and even Cookie Monster.  I've had to start a file to keep track of the suggestions.  What is crazy is that in this heightened creative state I no longer see barriers, only possibilities and colours.

I've been sharing my process with most of the painting I've done in the last month, a pictorial play-by-play.  I find it so interesting to look at the progression and the stages along the way. 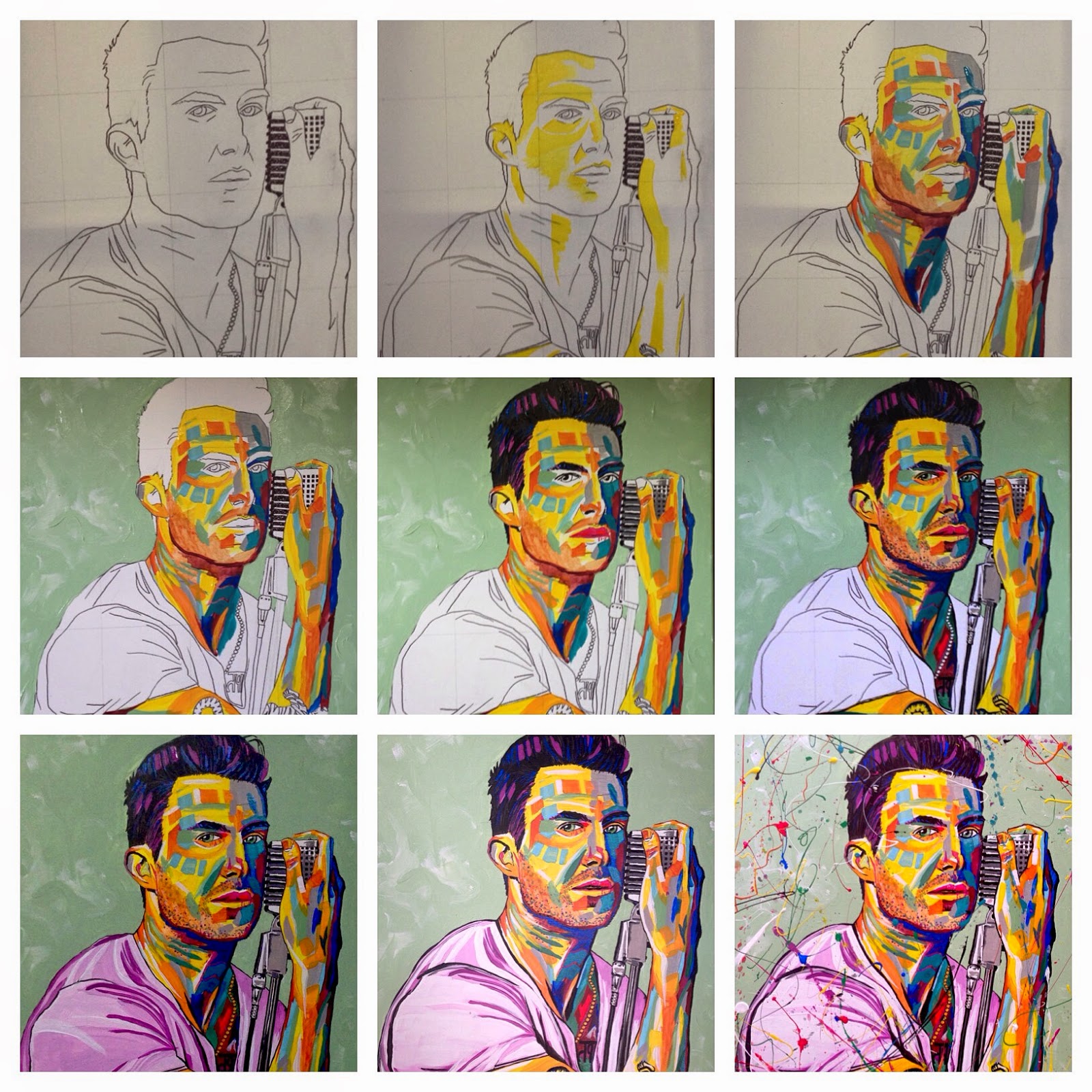 Stage One - Getting it right

The first step is drawing a set of squares on the originating photograph and transposing that same set of of squares to the canvas, record jacket, shed wall.  I then sketch out the subject, ensuring that the essence of the character shines through.  Details around the eyes, mouth and nose make all the difference here.  Depending on the subject, the sketching out can take several hours.  Once everything is penciled out, I use a black marker to make the lines easier to see once paint is applied.

I always start with the face and with yellow.  The brightest spots get dabbed with yellow before I move on to orange, light green, red, etcetera. This progression has served me well through all these pieces.

There is a time during every single piece when I go through a period of declining confidence.  It doesn't last long, but that's when I have to step back and focus on the end.  I also remind myself to trust the process.

Stage Four - The power of black

In among all these colours, black is a powerful force.  It helps strengthen the contrast and give shape.  It's always one of the last steps, when the painting really starts to jump off the canvas, or shed wall, whatever the case may be.

Stage Five - The wonder of white

While the canvas started white, when I'm almost done there is little to no white left.  The brightest areas of the photograph get a little bit of white to finish off the next to last phase.

At the very end of the painting process, with 3 to 6 hours of effort under my belt, I have to decide if it needs a final dose of whimsy.  With Miles Davis, Oscar Peterson, Bob Dylan and Adam Levine, the splatters and paint drip lines elevated the pieces to a whole different level.  It's a scary moment, not without its risks.  Each time I take the leap of faith and trust, it seems to work out the way the universe intended.

So, back to the original question.  What's it called?  Let's just call it whimsy until someone comes along to tell us different.
Email Post