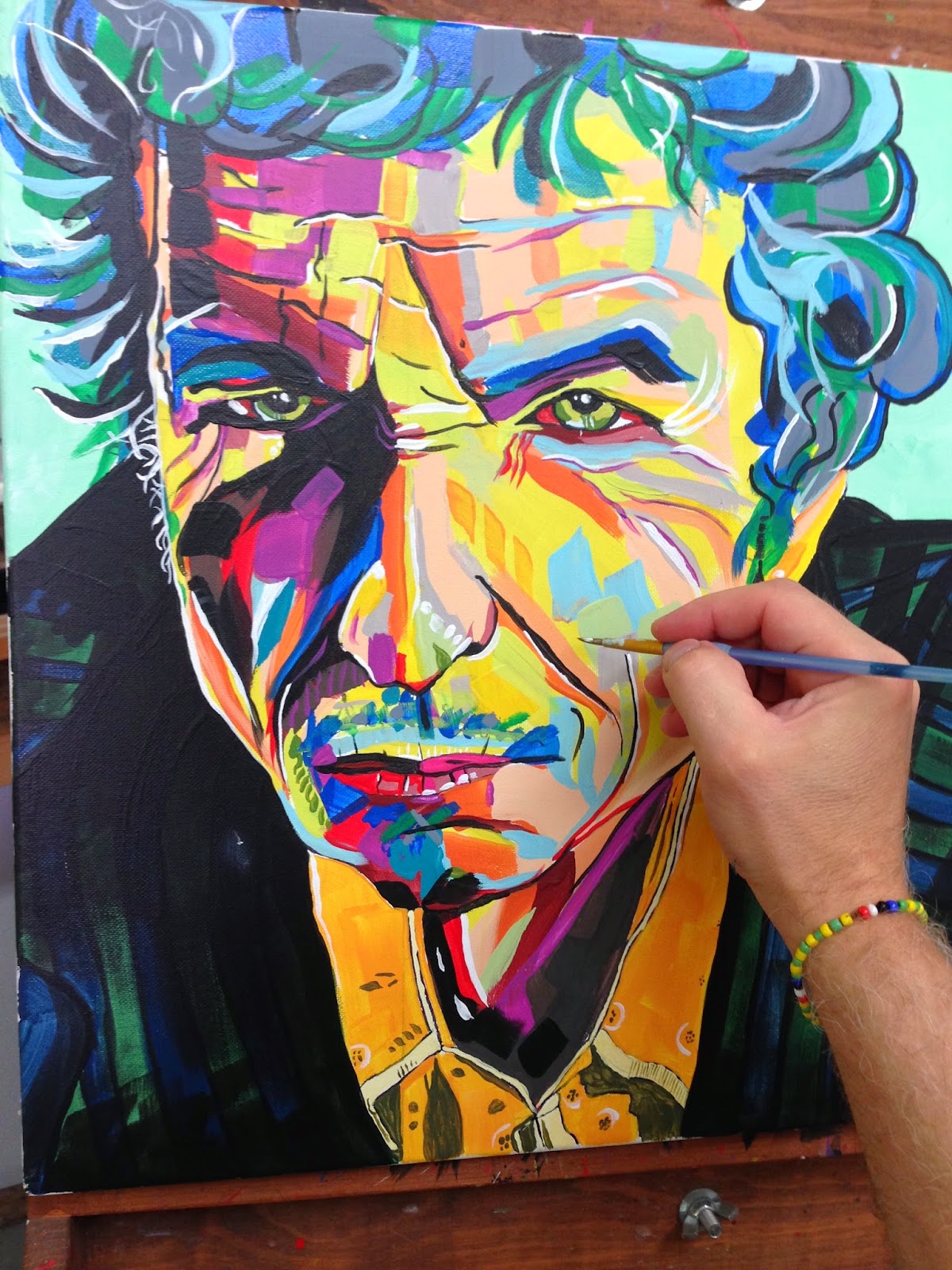 I could tell from the words being used in reaction to seeing the Bob Dylan portrait that it had hit the mark.  I'm glad it turned out that way, because there was a moment in the process, when the bulk of the work was done and I was just about to start the splattering, that it felt like I was crossing the threshold, putting everything on the line. 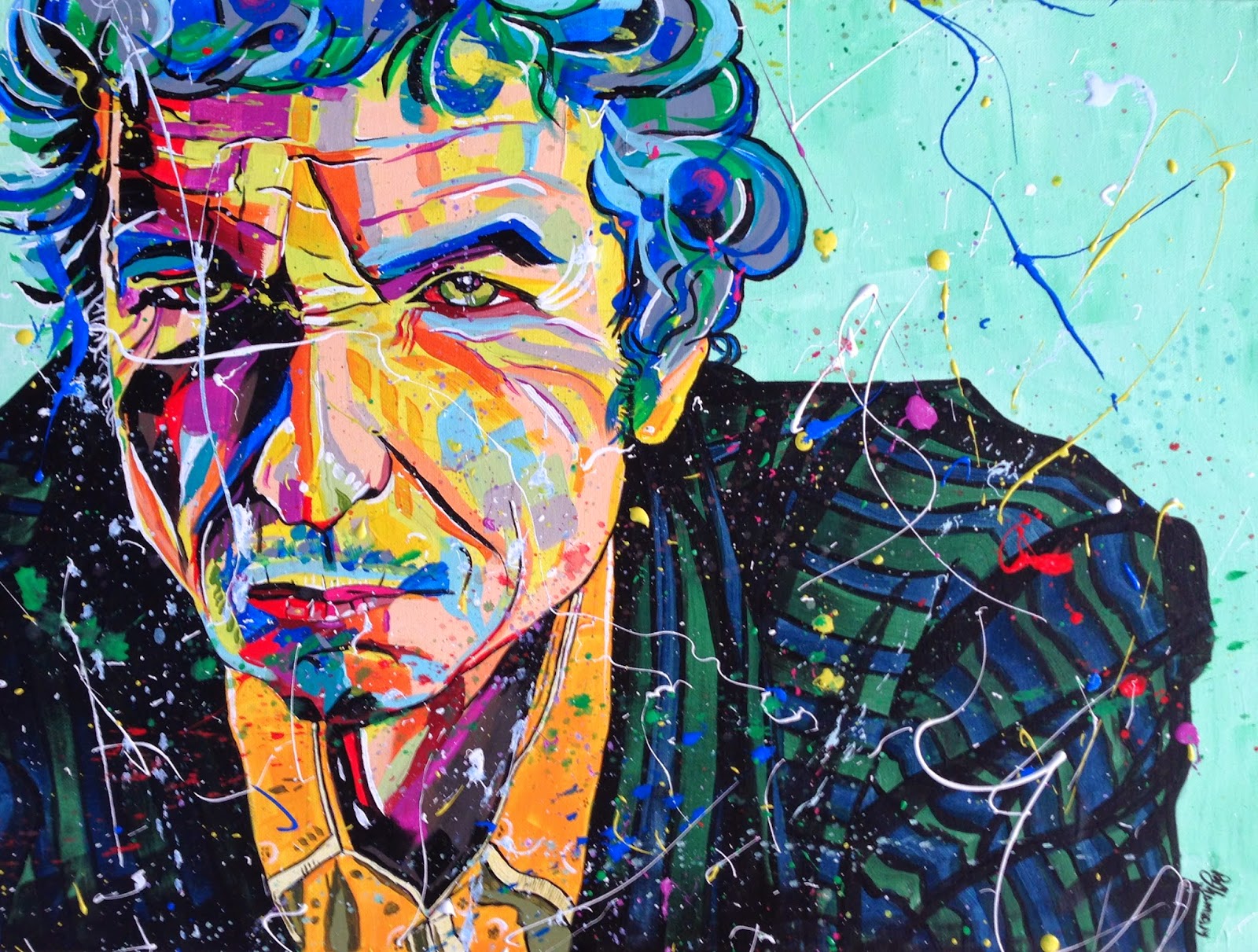 In the case of this 18" x 24" portrait, I had put the canvas on the floor of my shop, on top of one of my old election signs, and started blasting it with various bright colours, my arm snapping back and forth vigorously.  To an outsider observing through the tiny window of the shop, it might have been rather amusing.

Bob has been a consistent subject over the many years that I have been drawing and painting.  I have been a fan for a very long time and find that no matter the mood, I can flip on any number of Dylan's albums and feel like it's the perfect choice.  To me, he is an artist in every sense of the word.  I had my collection on random play through the entire painting process. 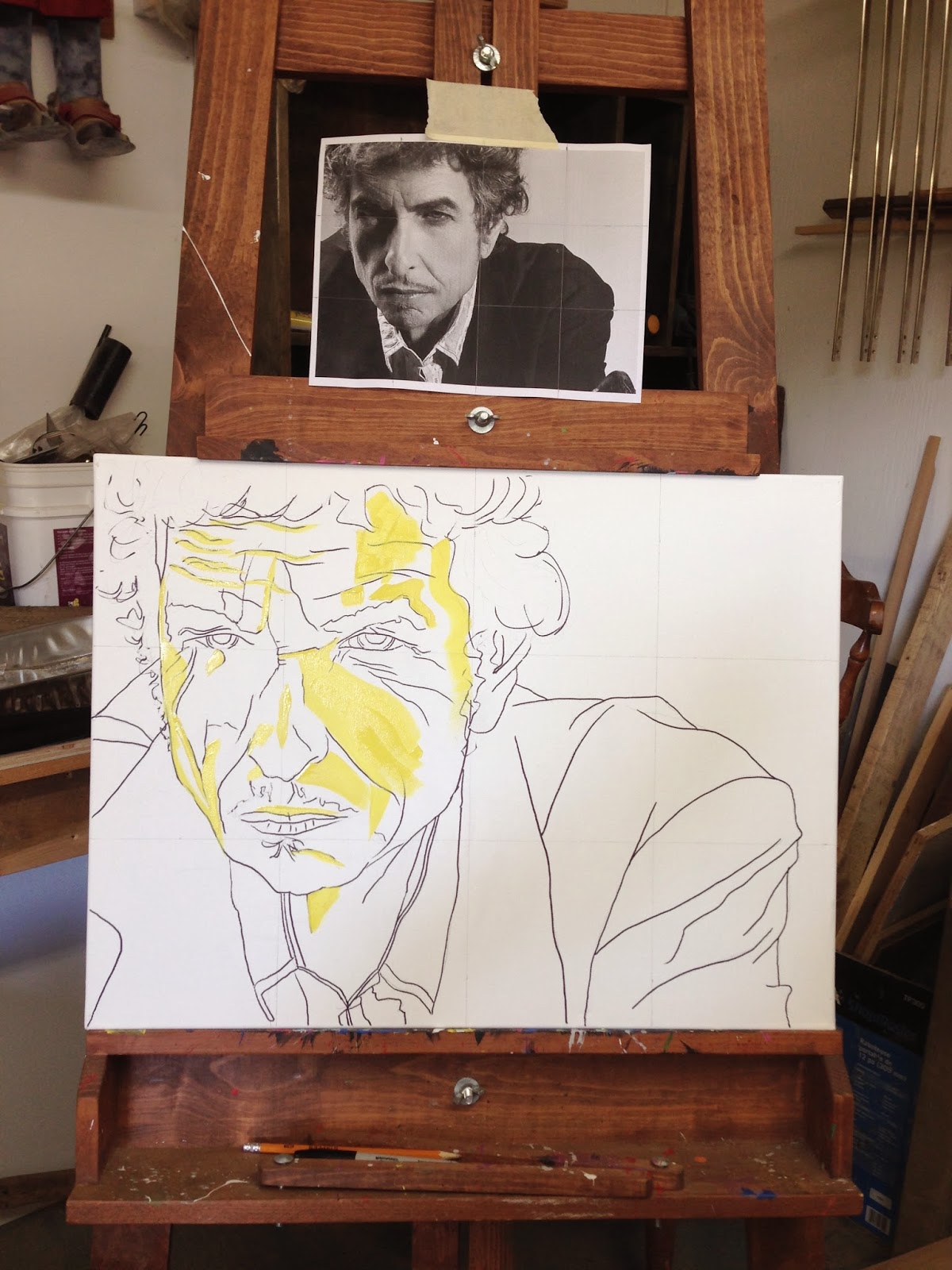 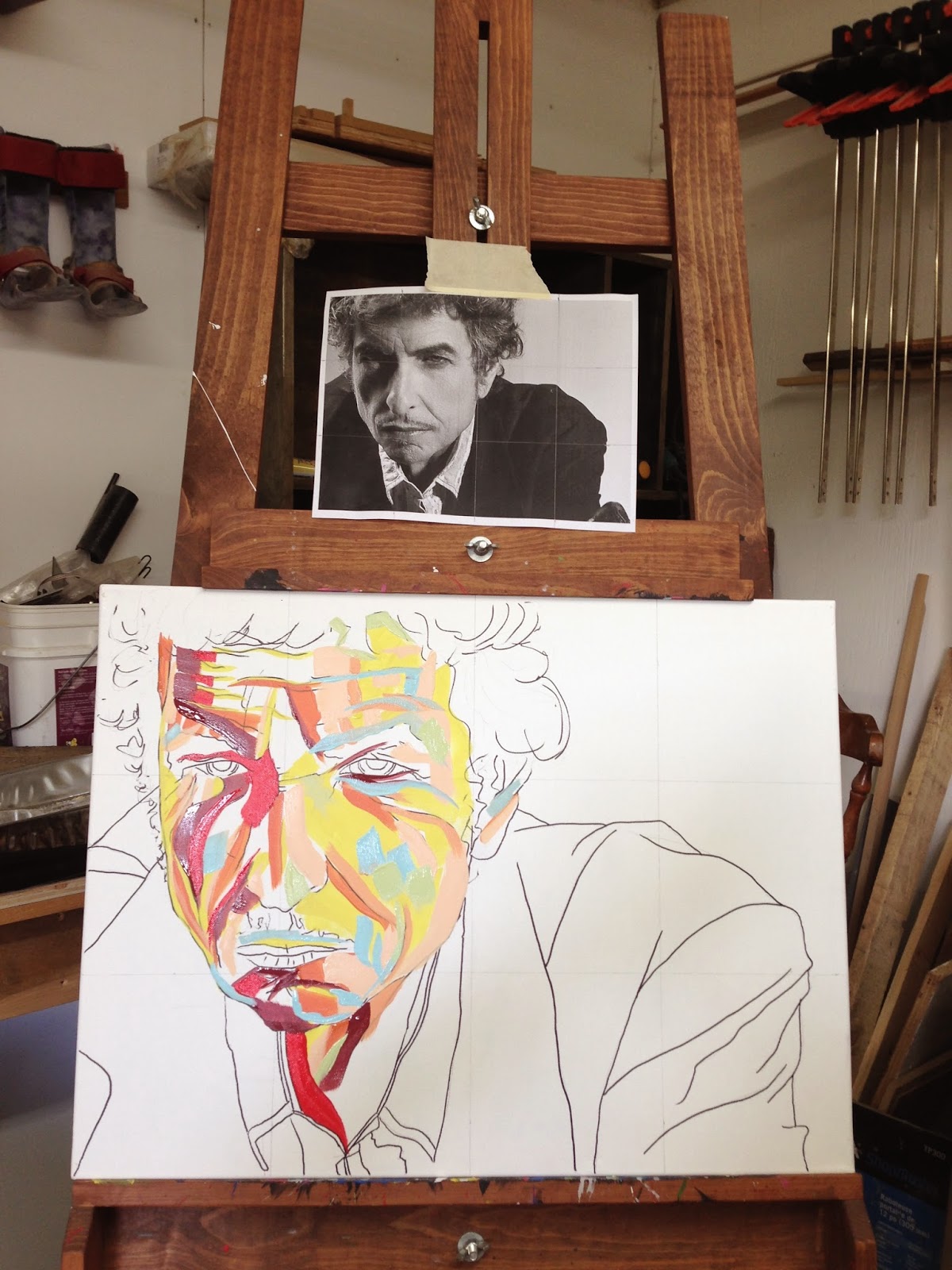 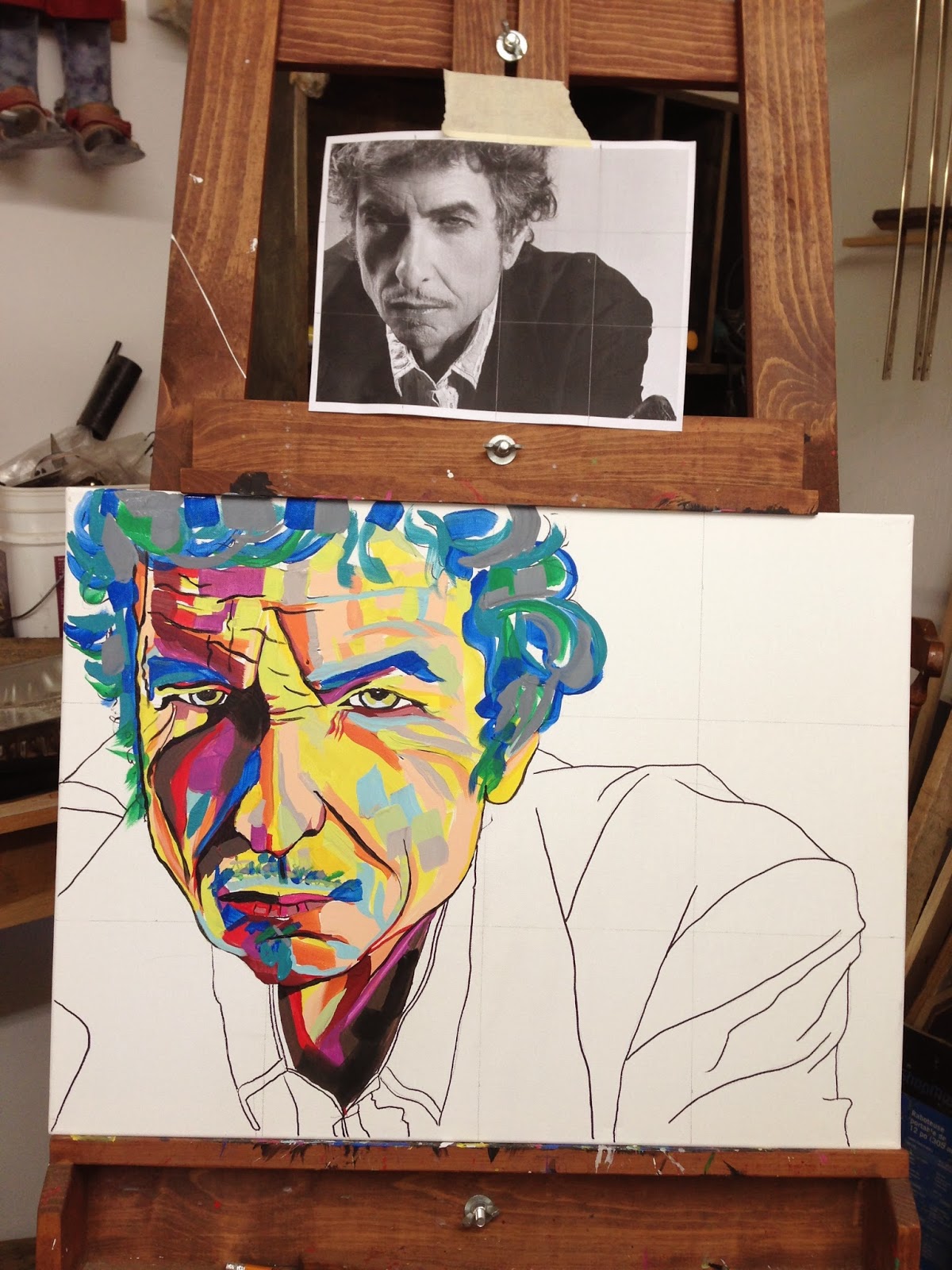 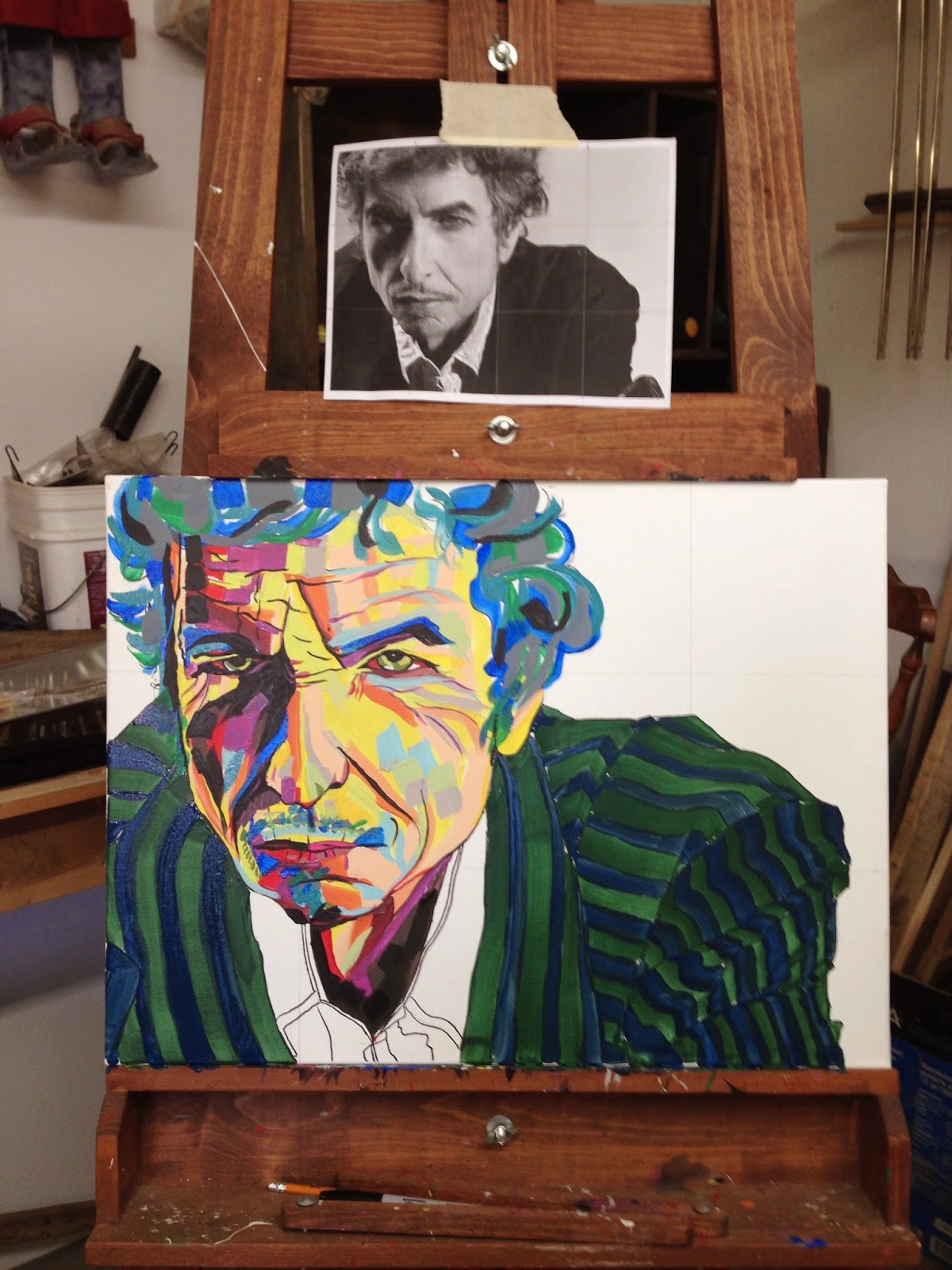 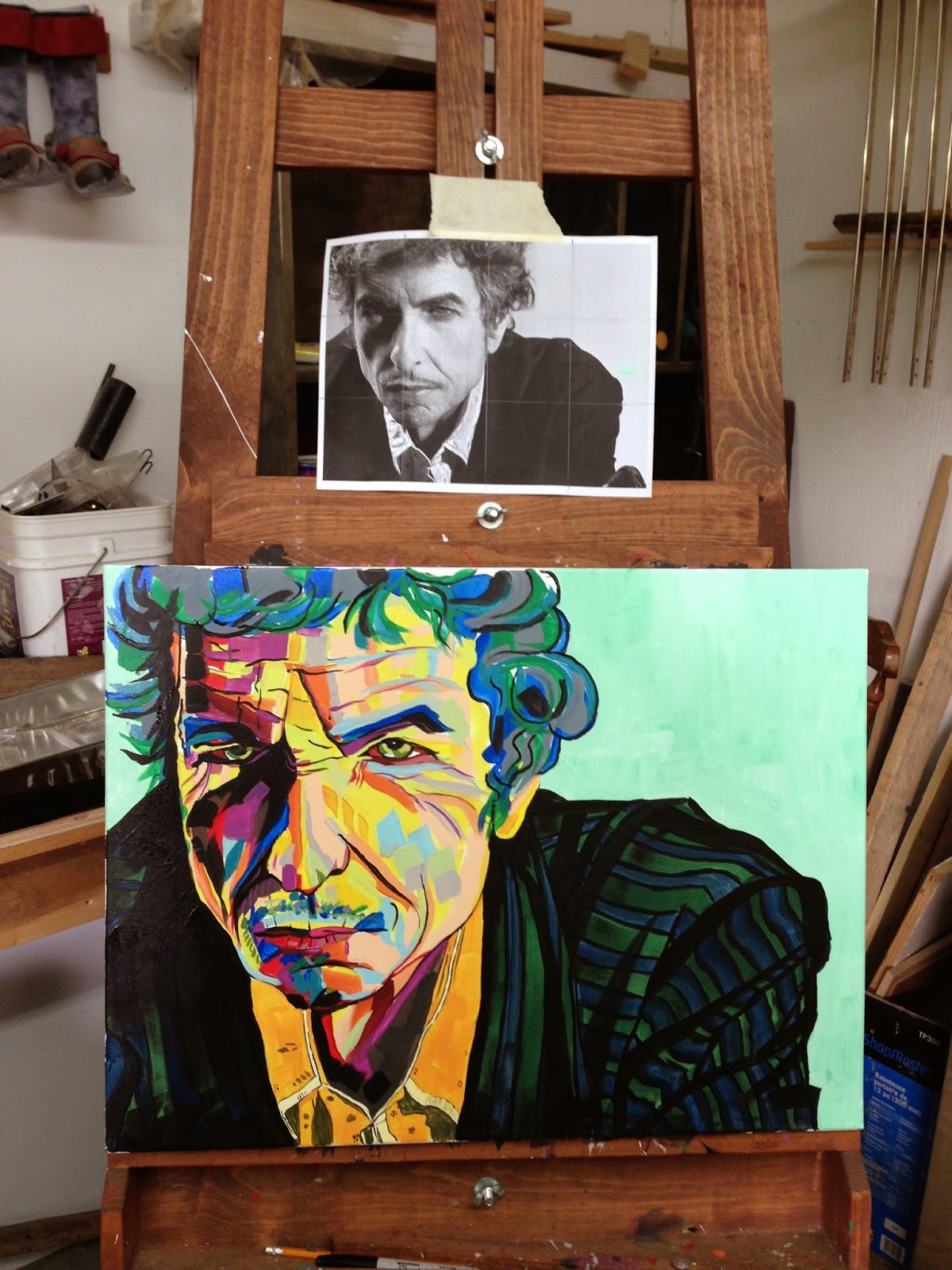 I said a few words at last night's municipal council meeting, expressing my support for the public art policy that was to have had second and third reading.  It ended up being pushed to today, because couldn't make it through the agenda.  In any case, Councillor Keith McGrath took the opportunity to say some kind words about the Dylan painting and publicly put out his hope that I take a stab at the Rolling Stones.  He is on the list.

Requests have been coming in slow but steady, ever since I posted the first picture of the Elsie mural.  But after Bob Dylan's portrait was public, it was like the floodgates had opened.  Requests of all kinds started rolling in.  One fellow wants a portrait with his dog, another is interested in a series of modern rock stars. One lady is interested in an interpretation of a scene from An American in Paris. I even had a request to do a portrait of the Cookie Monster in this new style that I've been exploring.  The strange and beautiful thing is that every single request has pushed my creative buttons.  I instantly see the possibilities, as I seem to be in the zone right now.

I've been sharing my creative process on Facebook, Twitter and Instagram for years, and even recently started posting a few things on LinkedIn, for my professional network.  This connected collection of people scattered across North America and in a few places in Europe provides instant feedback.  They responded effusively to this latest piece, more so than any other.  "Your best one yet", "Just wow!" and "I am speechless..." are just a few examples.  Best selling author of No Relation, and a fellow marketing and communications guy, Terry Fallis posted "Nice! Very impressed."  Having one of my favourite authors in the world just look at one of my paintings is one thing, but having him actually make a positive comment like that is absolutely humbling.

I'm really hoping that the public art policy gets approved tonight.  It is so important.  Yes, I was able to create public art for the low price of $10 and several hours of my time.  I had both the motive (to cover up a tag and honour a couple of women that I admire and respect) and the opportunity.  But if we're going to truly become a global model for sustainable living in the north and be a place where artistic surprises and cultural exploration abounds, then we have to have a funding formula that makes sure this happens.  Supporting and encouraging local artists, professional and amateur, is super important, but so is enabling and inviting the presence and creative brilliance of professional artists from outside our region.

If the policy goes forward, with the .5 percent suggested by administration, it would be a start, and according to one municipal official that I spoke to last night, would mean about $700,000 for public art in the next budget cycle.  But frankly, I agree with Constance Scarlett from Arts Council Wood Buffalo, that the standard in other jurisdictions is one percent, and that approving the policy at that level would be better.  It would put us on par with world-class urban centres like Calgary, Edmonton and Vancouver.  It would allow us to quickly catch up during this period of incredible infrastructure growth.  And it would send a message to the rest of the world that Wood Buffalo is a lot more than big trucks and big salaries.

As an artist, I long to be inspired by the creators who participate in a robust public art program.  I long to see residents and visitors engaging with public art every day, in public places and unexpected spaces.  It will be a source of inspiration, for me and countless other artists, young and old, in our region.  It will be an additional source of pride for this place we call home.
Email Post