So much in one little visit

I spent the morning sketching out Katy Perry, the 29 year old pop sensation, in preparation for painting an 18" by 24" portrait in the afternoon.  Before I sit down for a long stretch of painting, I prefer to clear my mind of things by getting things done that need to be done: cutting the grass, doing laundry and the like.  One of the things on my list was to do an interview with Reinalie Jorolan, one of the artists participating in the municipality's Artist In Residency program, for an upcoming article in the paper.

Heather wanted to see the exhibit at MacDonald Island, and as that is exactly where Reinalie and her residency comprades were working, she decided to tag along.

We walked into the Suncor Community Leisure Centre, eyes forward, when all of a sudden we heard: "Russell Thomas should buy this book!"

We turned around and saw Sheila Chartrand and her daughter Kallie seated at a table selling copies of their children's book "The Schobrine".  Sheila wrote the story with Kallie supplying the illustrations, as a dedication to Corey (Sheila's son, Kallie's brother) who tragically died in December 2010, along with Neil Bursey, driving from Saprae Creek to town to do some Christmas Shopping.

As they told me about their project, a fundraising initiative in support of Kid's Forever, which donated $40,000 to our local hospital in Corey's name, it was clear that their inspiration was this young man who left us much too young.  Described as the "gentle giant" - he was 6'6" and 300 pounds - Corey always went out of his way to help people, to look out for the little guy (or gal) if they were being bullied, or if someone needed help.

"He was drawn to kids that were in need of something," said Sheila.  "He'd do whatever was required to put a smile on your face."

The love, connection, and passion for the project was abundant in Sheila's eyes as she spoke about her late son.  Losing a child at any age is unimaginable to me.  Losing a child in the prime of his life.....well, there are no words.  Sheila and Kallie have taken a terrible negative and made something incredibly positive. 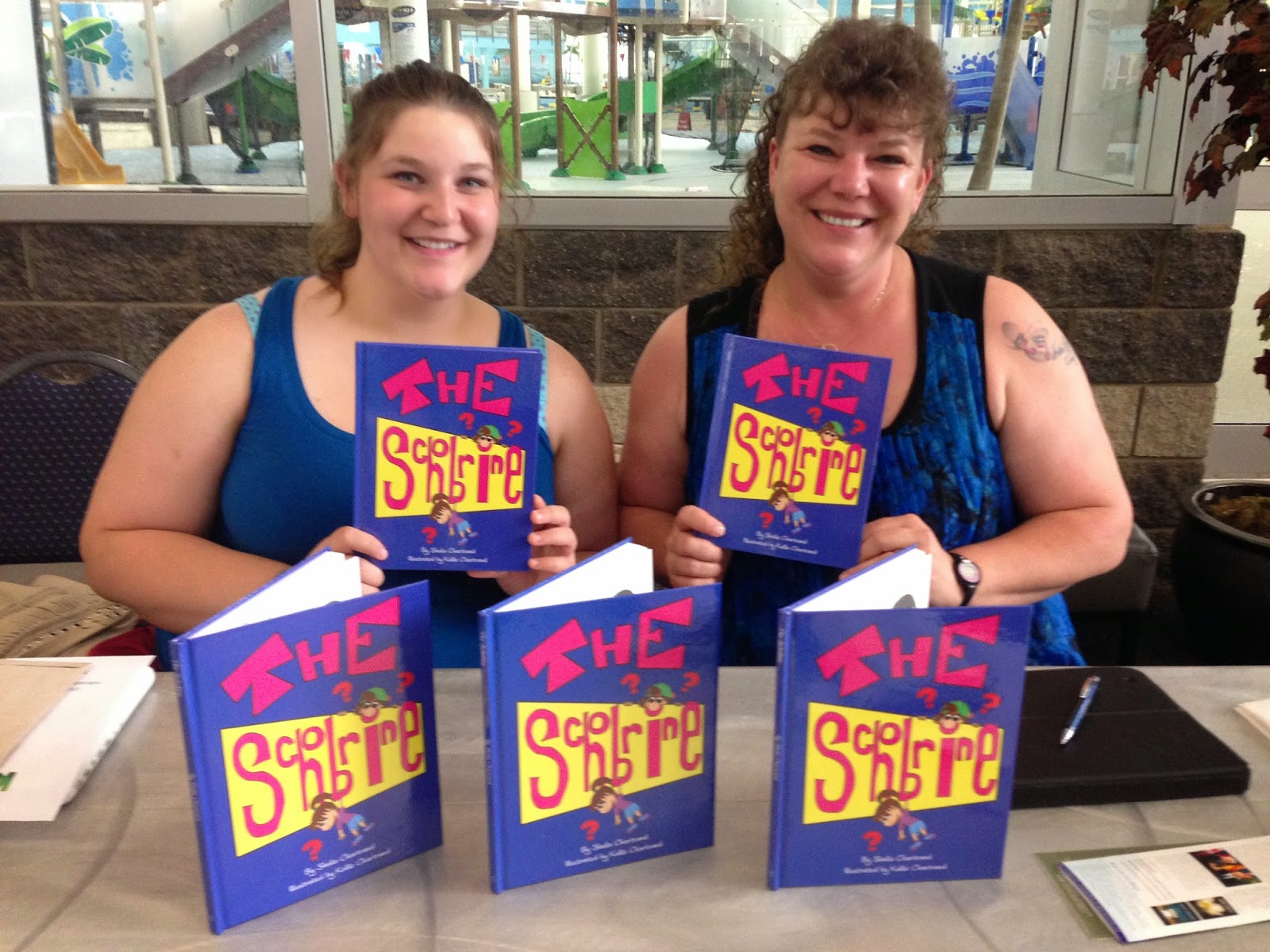 "The Schobrine", released in 2013, has been a remarkable hit, selling over a thousand copies so far at various locations throughout the community and at tables like this, set up in the lobby of the Suncor Community Leisure Centre.

For the complete story, watch for a future YMMARTS column in the Saturday Fort McMurray Today or check out their website at www.comeovertomyhouseseries.com.

I continued upstairs to the Community Art Gallery.  Getting to the top of the stairs, I saw two figures off in the distance.  They've installed a couple of statues, I thought to myself.

Getting closer, I realized they were two individuals in a Falun Dafa (Falun Gong) pose.  A Chinese spiritual discipline that combines meditation and exercise with a moral code centred around truthfulness, compassion ad forbearance, the two practitioners were drawing attention to The Art of Zhen Shan Ren International Exhibition, which was into its final two days.

Comprised of over 35 works, the collection, which has traveled around the world, explores the spiritual discipline of Falun Gong and many of its inherent challenges within the context of communist China.  It is a beautiful, shocking, and important exhibition.  Your final chance to reflect on these amazing oil and water colour paintings is today (July 27).

The Artist In Residency banner at the end of the gallery hallway marked my original destination for this trip to MacDonald Island, which had already been unexpectedly rich.  Inside, artists Liana Wheeldon and Reinalie Jorolan were hard at work on their respective projects. 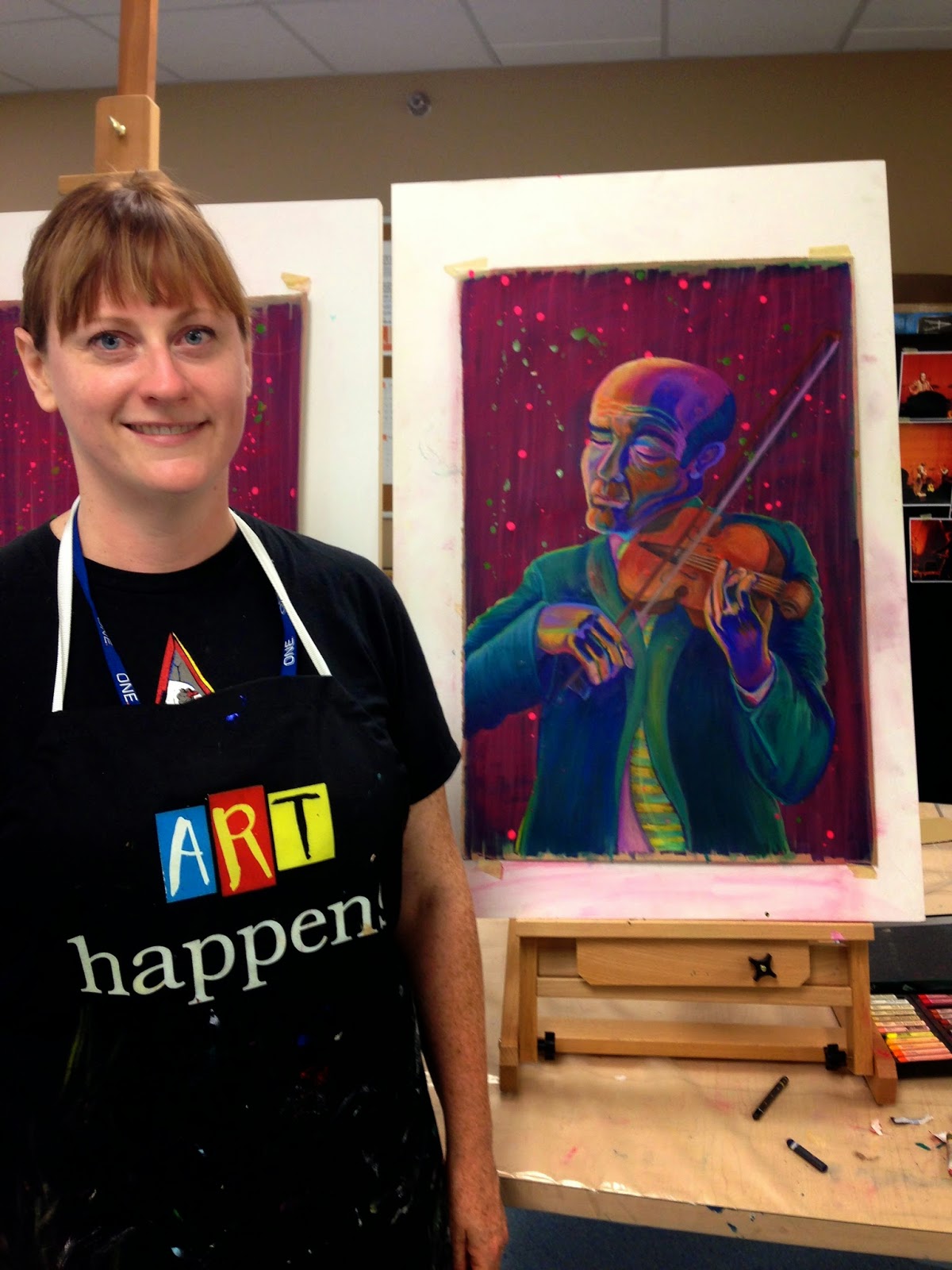 Liana, drawing inspiration from a recent trip to Cuba, was in the final stages of a stunning pastel piece that grabbed my attention immediately.  A graduate of Emily Carr in Vancouver, Liana is an inspiration to me, as she has shaken off a successful career in retail leadership to pursue her art.  She is obviously having an amazing summer, creating in the studio space located in the Snye Room. 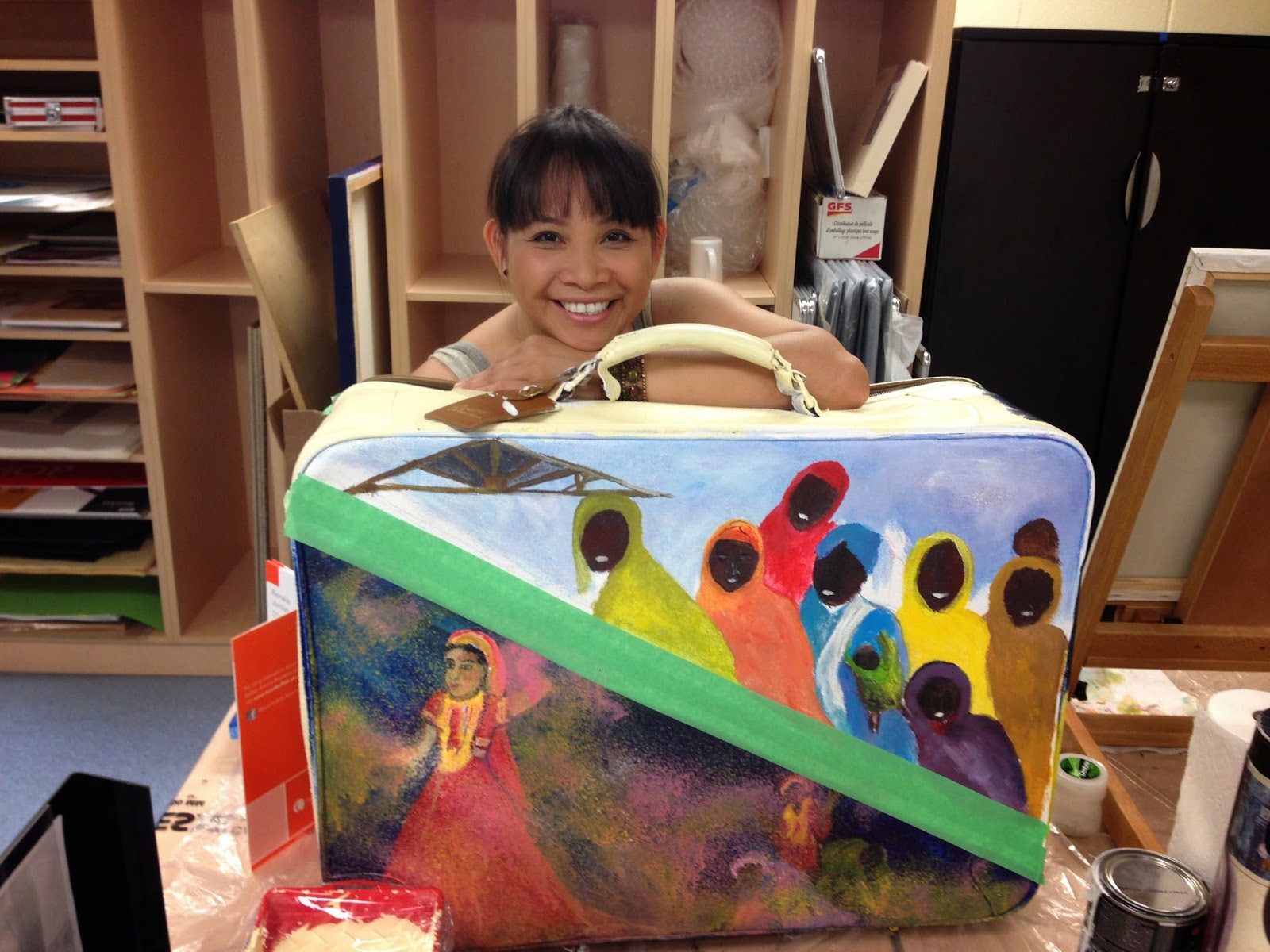 Another inspiring human being is Reinalie.  A former colleague at Keyano College, a fellow actor in Hometown...The Musical!, an artist and an arts champion, Rein is a significant life force in our community.  Originally from the Philippines, she has carved out an amazing life for herself and her son in Canada.  Her project titled The North's Memoirs of Migration explores stories of newcomers to Canada. 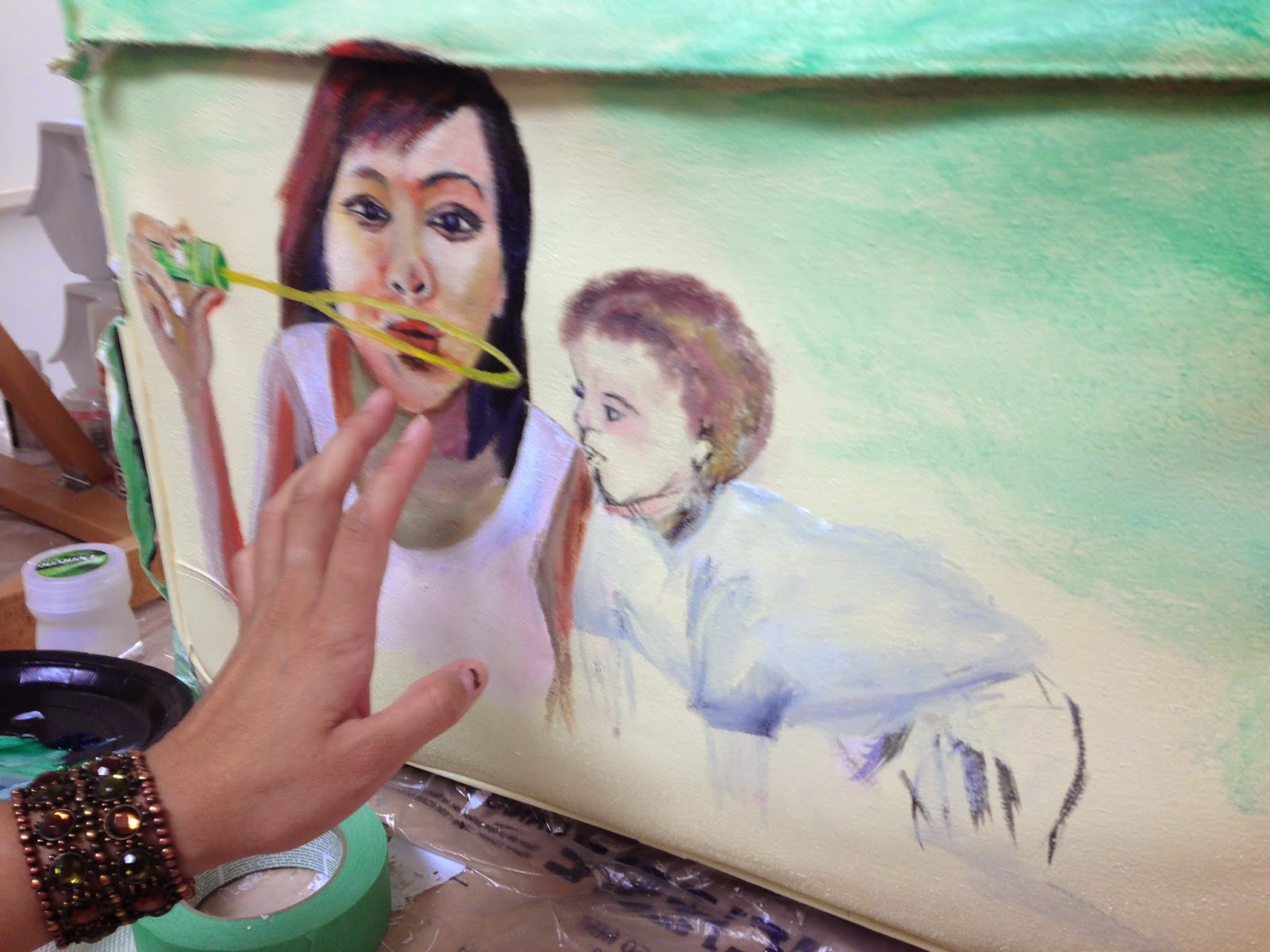 Inspired from interviews she has conducted, each side of two suitcases - one for the female perspective, another for the male - features a story.  Leveraging the writing talents of our mutual friend Nathan Berube - a poet of the finest order - written narratives and poems will accompany the finished pieces when they are displayed during the exhibition planned at the end of the Artist In Residency program. 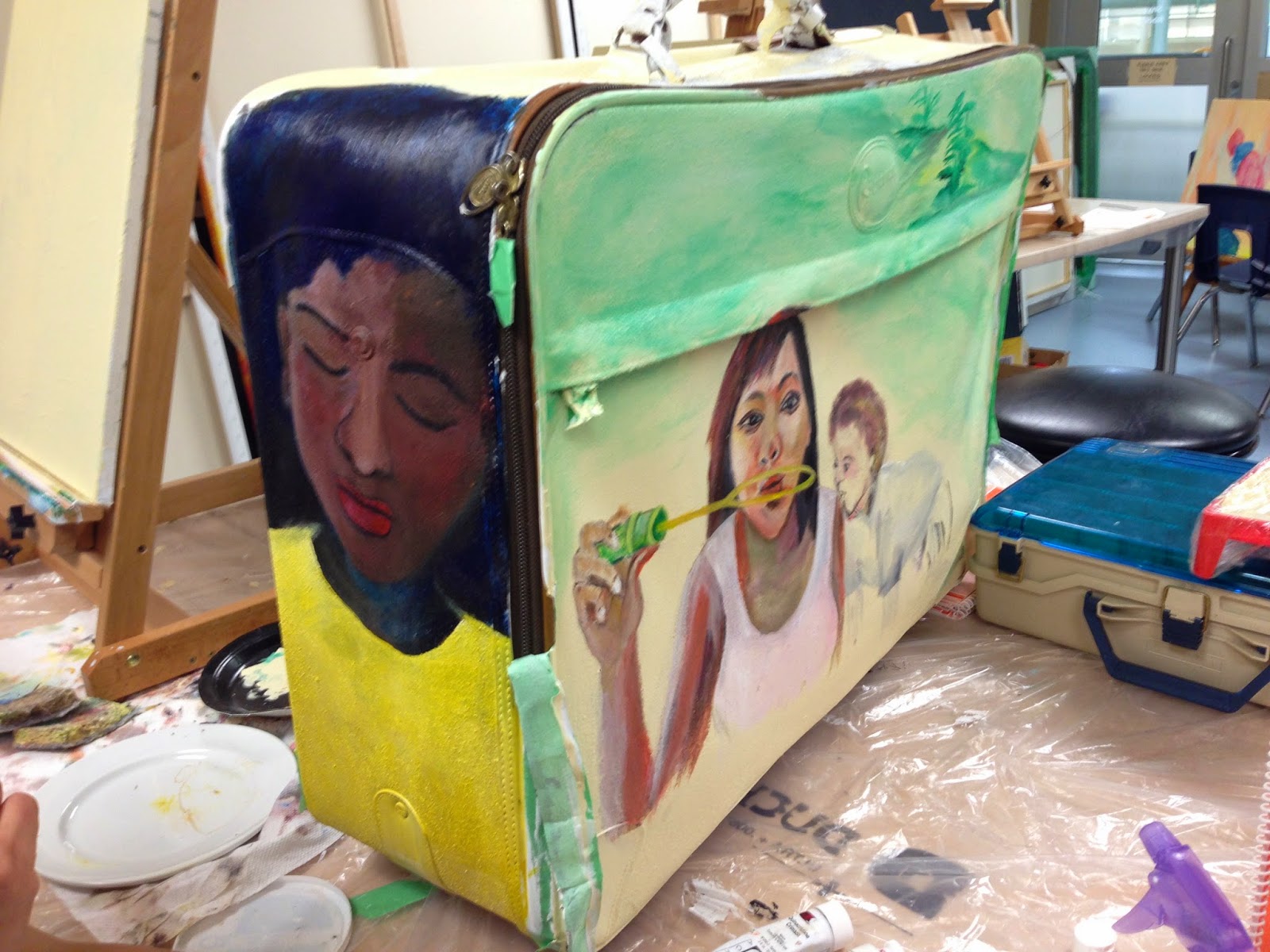 She is still looking for some interview subjects for the project, particularly on the male side of the human spectrum.  If you know a new Canadian with a story to tell, send Rein an email at reinalie.jorolan@gmail.com.  That person's remarkable life could get immortalized on a suitcase that is going to be pretty unique.

One little visit to MacDonald Island produced so much.  I suspect that experience is not uncommon for people, as it is a place that exudes energy, connection, and possibility.
Email Post