"How was your trip?" I asked Norm Sutton as he returned home from a 6-day motorcycle adventure through Saskatchewan and Alberta.

"It was all great except for today," he said.  He had run into some significant rain which can be a real drag on the whole driving-around-in-the-open-air thing.

"Oh, you put the banners back up," said Norm Sutton, walking into his back yard with his wife Sheila and son Tim observing two theatrical treasures from Keyano Theatre's production of The Rocky Horror Show, promotional banners featuring the artwork of Andrew Johnstone.  They had lived on the east-facing wall of his chipboard cladded shed for years, taken down earlier this summer so he could give it a fresh coat of paint.

"I think your day is going to get a little better," I said, as Tim and Sheila reached up to reveal what was lying behind. 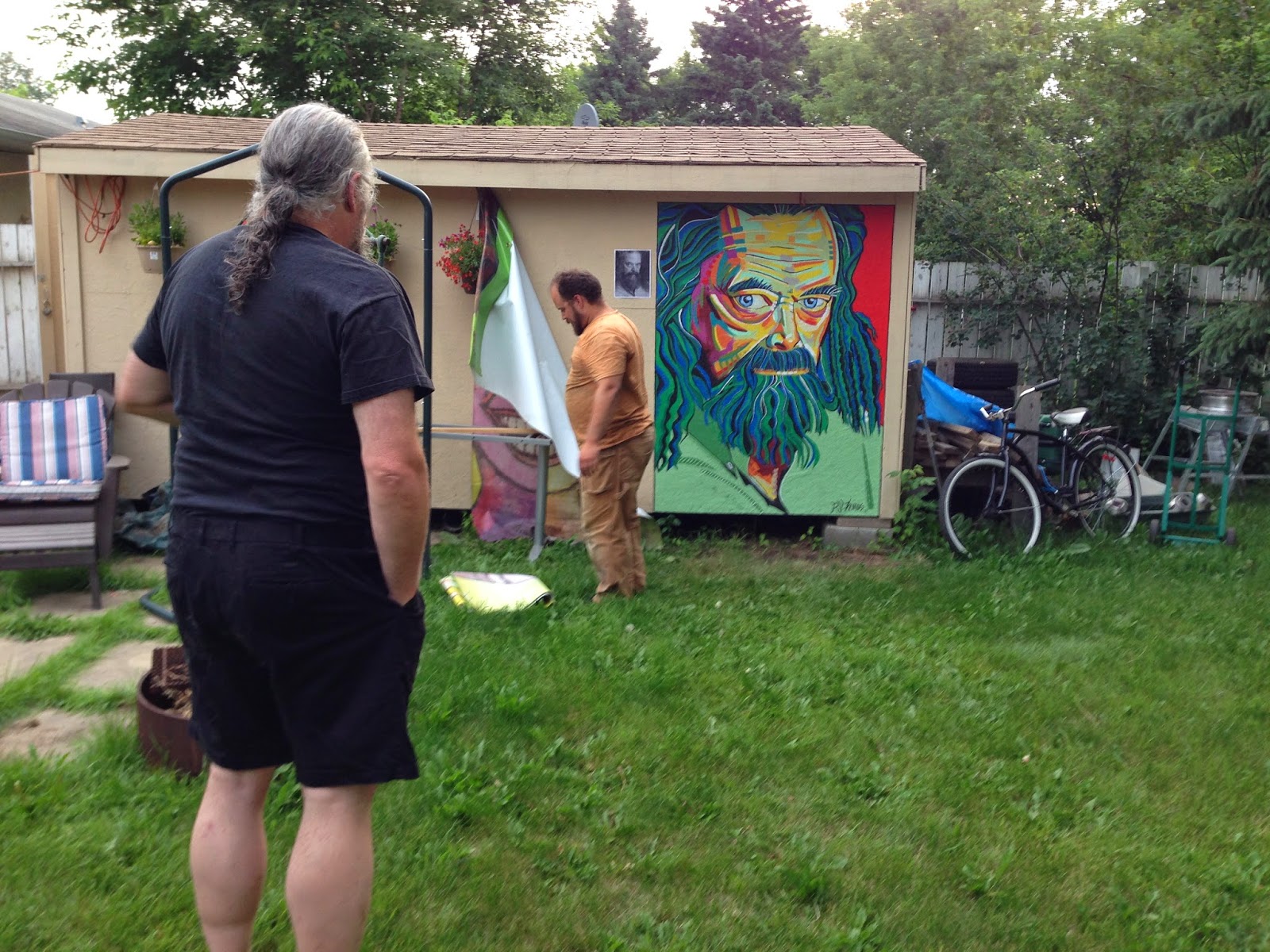 I can't tell you what he was feeling seeing a mural himself informed by his headshot that was taken for Dracula call board a number of years ago, a striking portrait taken by Sean McLennan from Keyano College; you'd need to ask him.  He appeared to be rather moved, almost speechless. 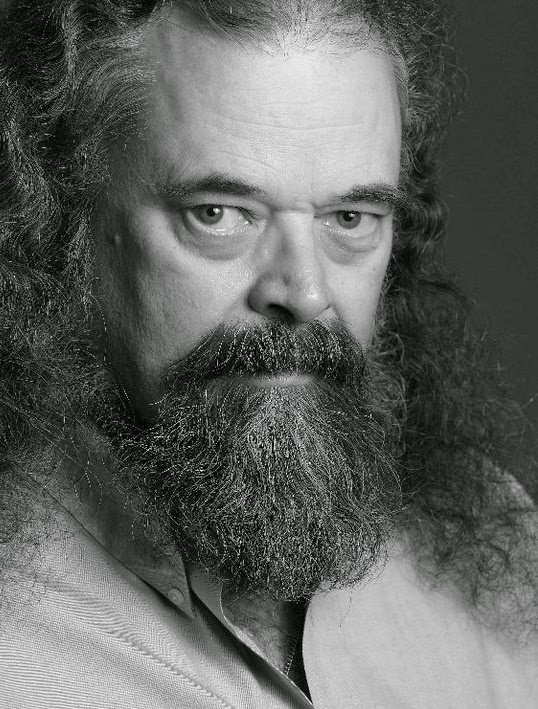 I have known Norm for a long time, longer than most people that I've met since moving to Fort McMurray in 1996.  He applied for a job with interPLAY in 1997 having recently moved to town after several years living in Fort Chipewyan, running the Northern Store.  We hired him to manage the interPLAYERS project, an initiative to take theatrical arts out to the rural communities.  He (and they) did a great job and made many lasting memories that summer.

Norm eventually joined the interPLAY Board of Directors and became a passionate volunteer who enabled the growth and development of our former signature summer arts festival.  The hours and effort that he put in during the festival were legendary, lending his incredible strength to putting up tents and getting the site ready at a time when much of that process was volunteer based.

We became neighbours in 1999 when I purchased the house next door.  He was there is good times and times that were not-so-good.  Our respective children have grown from infants to adults - or in the case of Dylan, an almost adult - in the time we've lived side by each.  We've inspired each other with renovation projects, and strategically built a gate so we could easily go back and forth from one yard to the other.

Norm and I have also had the joy of working together in a number of different Keyano Theatre plays: The Farnsworth Invention and most recently, Les Mis.  He brings such positive energy, enthusiasm and character to the company.  In a sense, he is a binding agent, effectively connecting with both the younger and older members, volunteers and artistic team, and staff.  In fact, I can't imagine KTC without him and Sheila.  I can't imagine not having them as neighbours and don't look forward to the day they retire and move to BC.

All of this to say that when Sheila approached me about painting a mural of Norm while he was away on his trip, I was honoured to try.

On a hot sunny Sunday (July 13) I began my process of creating a grid on both the 8.5" x 11" black and white printout of the photo and the 72" x 54" spot on the shed.  Then I sketched out the complexities of his face and facial hair, outlining the same with a black marker. 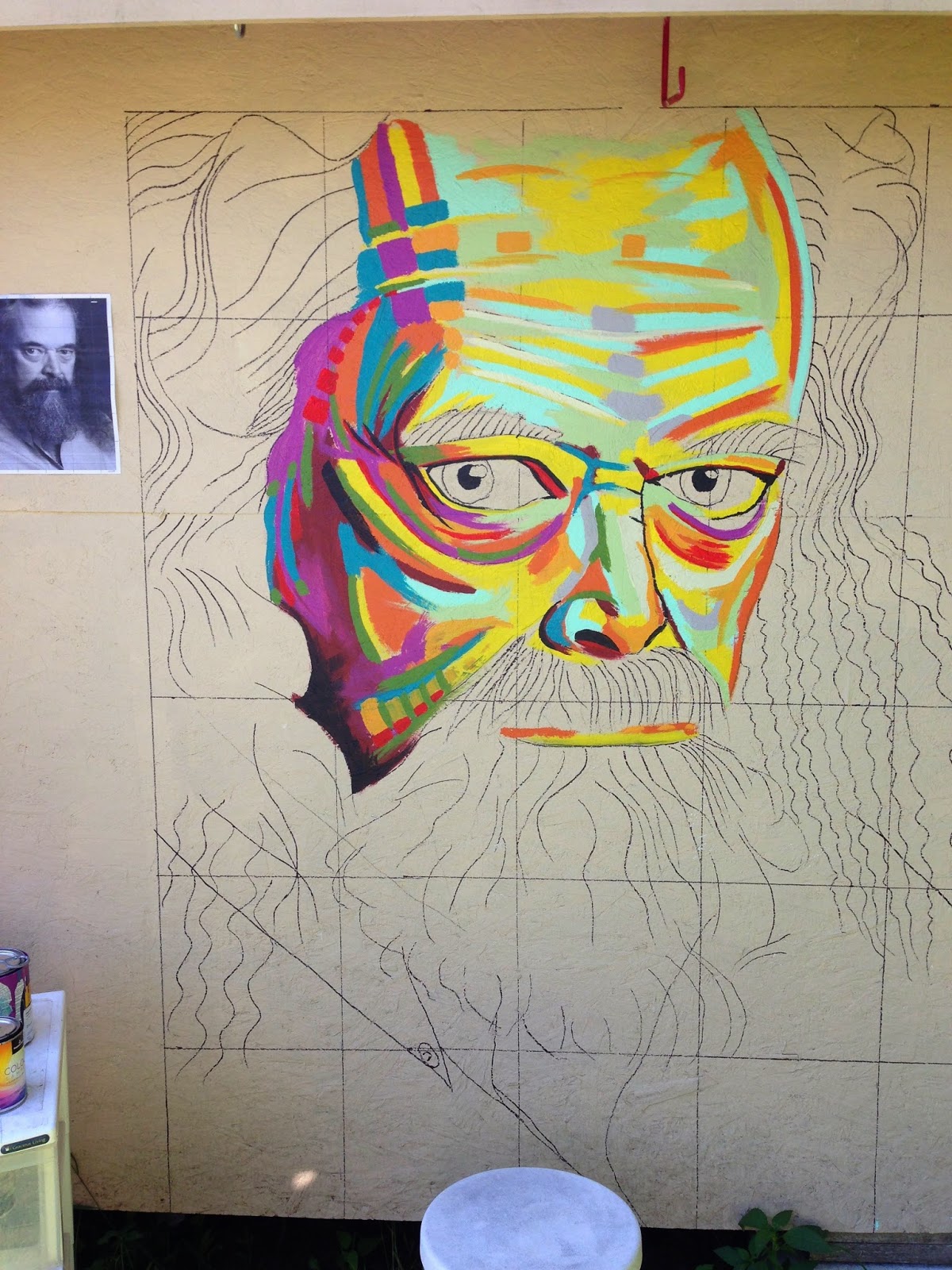 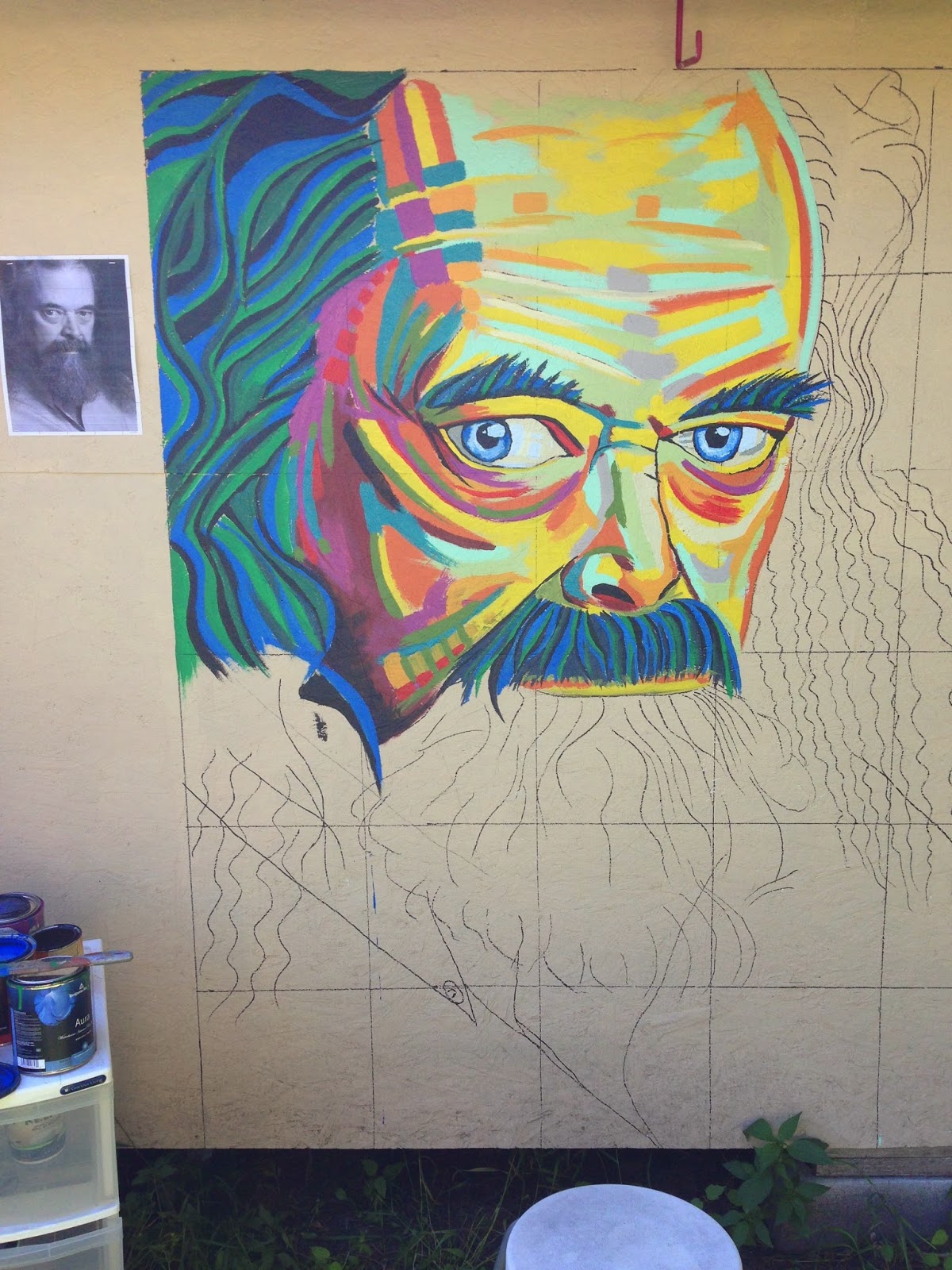 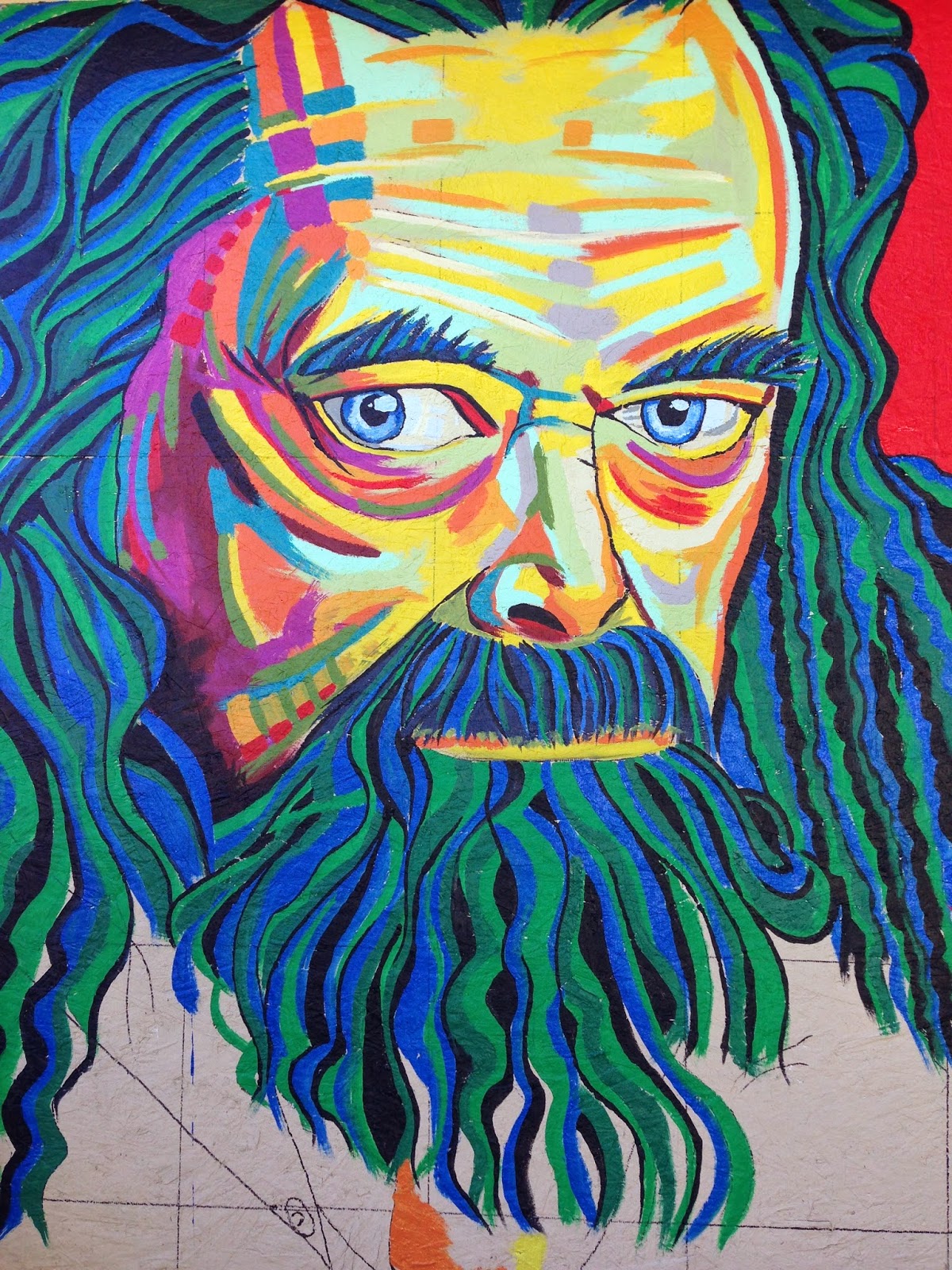 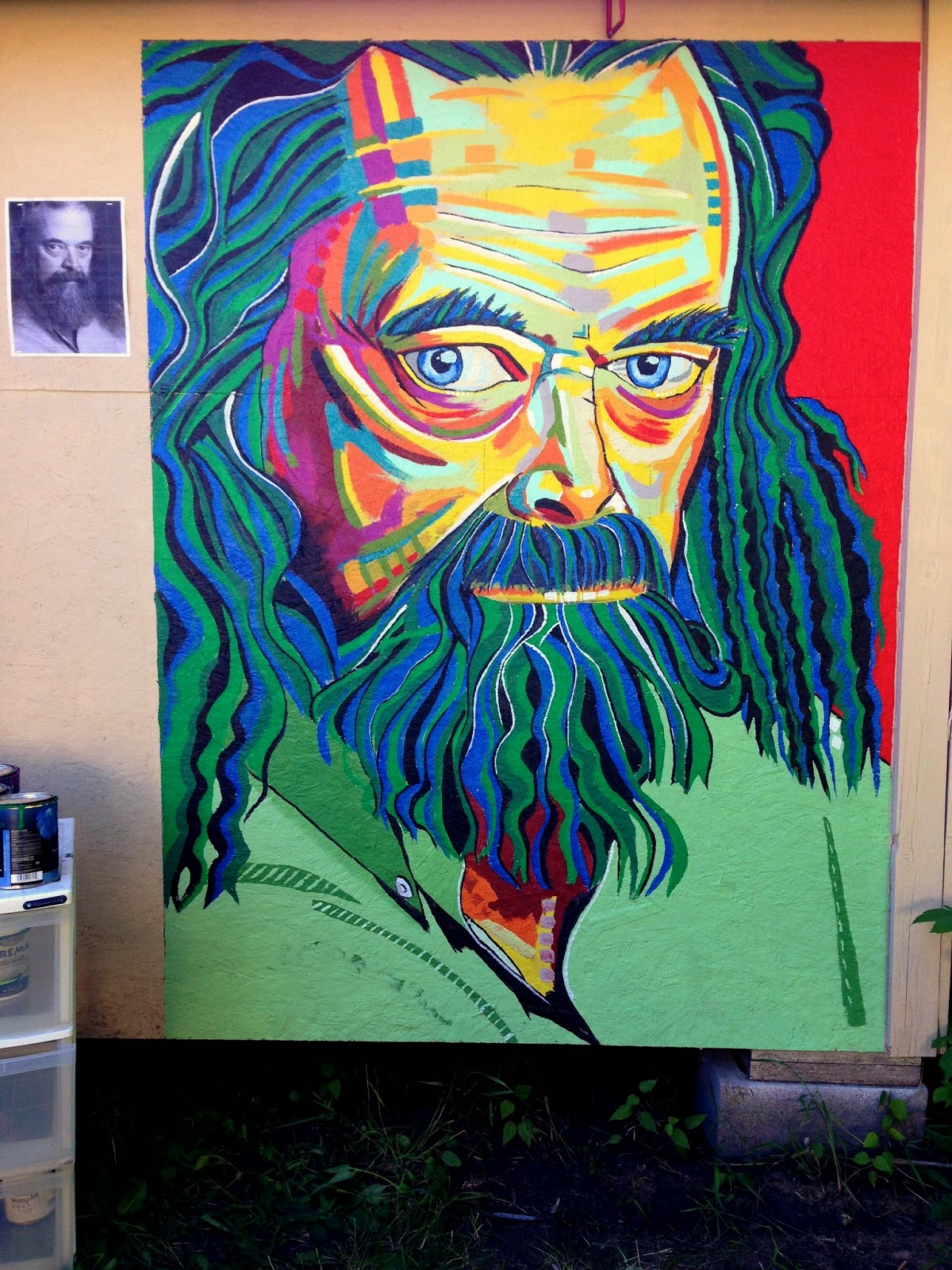 Once the painting began to the time I added my signature I'm guessing that 6 or 7 hours had passed.  I finished in the evening. 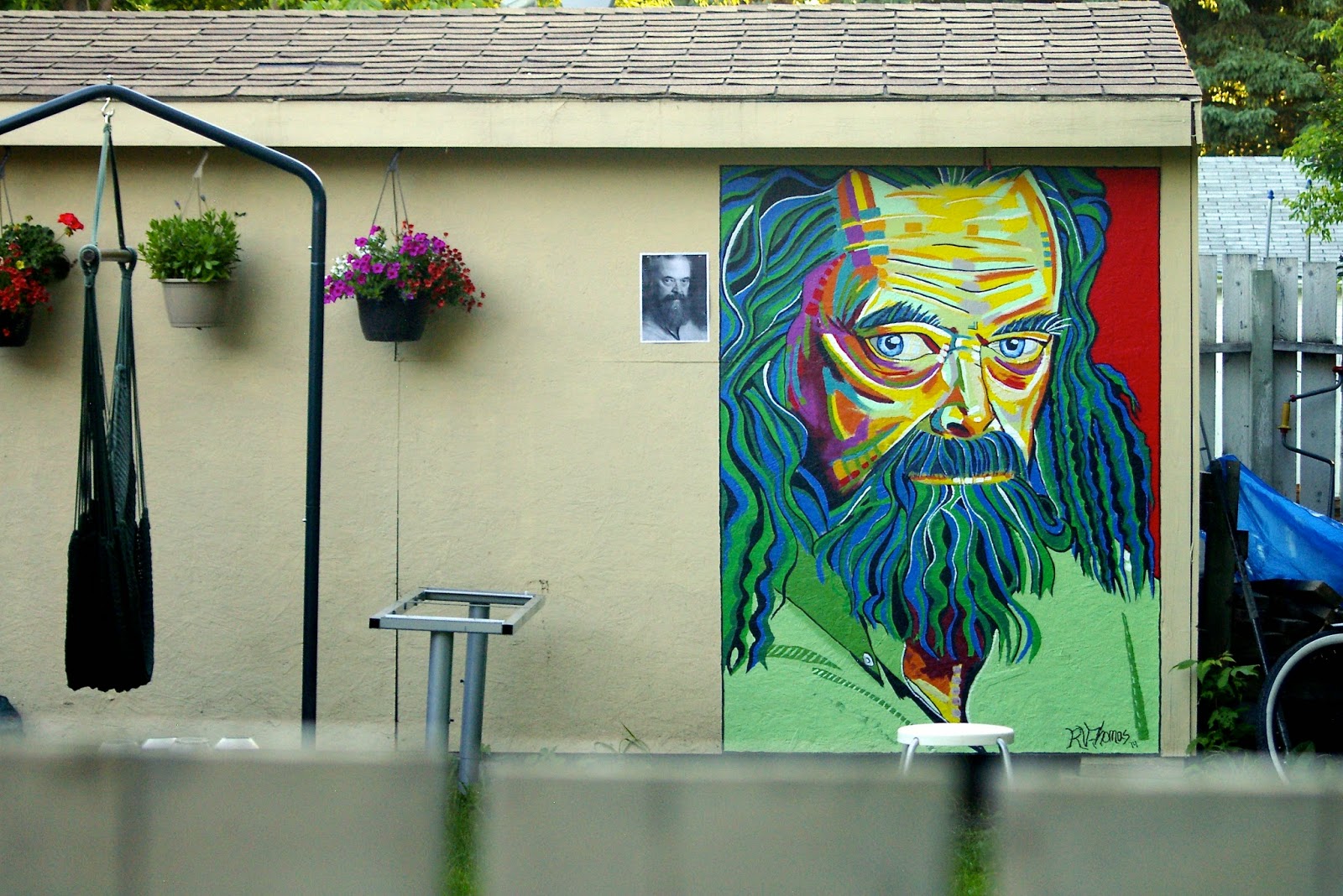 Norm is a neighbour, fellow arts champion, actor, character and friend. It was an honour to capture his "verve", as someone described on Facebook after the big reveal last night.  Now, whenever I need a Norm pick-me-up, all I have to do is look over the fence.  Yes, there was an ulterior motive to this creative exercise. 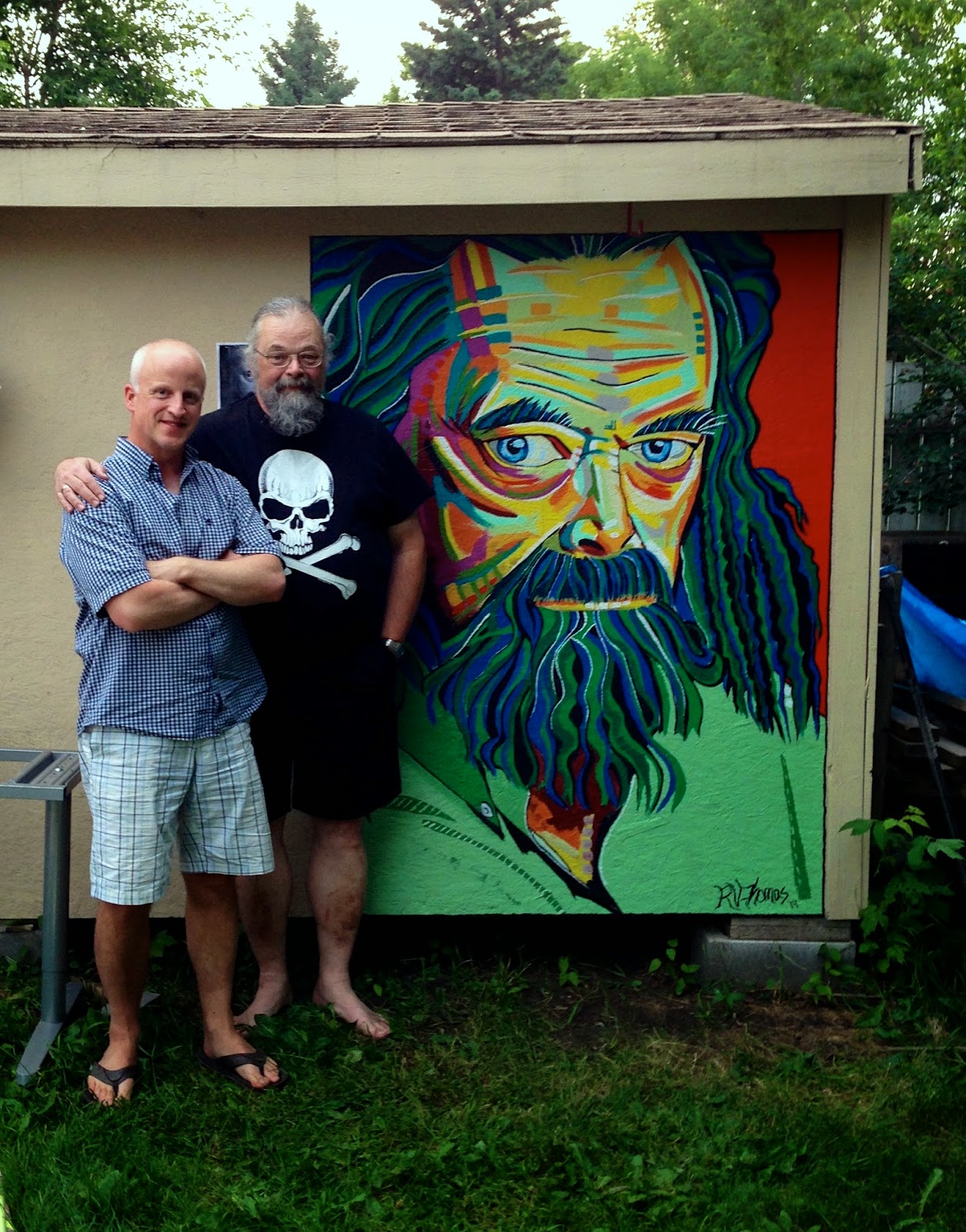