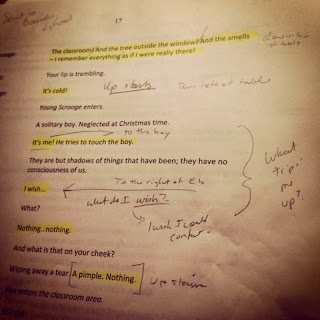 Everyone learns lines in their own way.  For me, the days between rehearsals are when I get the bulk of my learning done.

I begin by grabbing some time, usually an hour or two when I duck into my study after having let everyone in the house know that I'm working on my lines.  I usually am very specific as to how long I will be ensconced for two reasons: first, so I don't get interrupted, and second, so I have a clear goal for myself.

Some people like to run lines with each other as a way of learning.  Sadly, that only works for me when my lines are 90 percent entrenched in my brain.  I need a lot of solitary work to get to that point.  I also tend to learn sequentially, starting with the first scene and working my way through the show, always running through previously learned scenes before embarking on new territory.

You'll notice I don't use the m-word (memorize), because for me, this process is more about infusing the character, his thoughts and words, into my bones than trying to recite the text on the page.  New notes get scribbled into the margins as I work through the pages making small discoveries, asking new questions and plotting my emotional and physical track through the story.

Jenny Price, playing the Ghost of Christmas Present, talked the other day about the importance of her physical track through the show.  She was absolutely right, as the blocking, both on stage and where you are before and after a scene, all combine to root you in the character and the story.  By the time we're running the show on the deck, my location at any point in time will become very predictable, and necessary for my process as an actor.

This is one of those shows, similar to The Farnsworth Invention of a couple of seasons ago when I played David Sarnoff, that my character is on stage pretty much the whole time.  As Scrooge, I'm either talking or watching other people talking.  So my backstage track will be limited to where I am at the top of the show and the second act.

After two days of learning lines, I'm 90 percent there with the ghosts of Marley, Christmas Past and Present.  I'm only part of the way through the scenes with the Ghost of Christmas Future.  After that, it will be on to the closing scenes of the show when Scrooge gets a little giddy.  I'm hoping my journey to Edmonton for meetings with the Premiers Council on Culture gives me some quality learning time.  Airports and airplanes are good for that kind of thing.

Ben (playing Ghost of Christmas Past) and I ran our lines on Sunday.  Whether he realizes it or not, he is 100 percent off-book already, knowing his lines and all the cue lines that surround him.  His young and nimble brain never ceases to amaze me.  Sitting around the living room, he didn't need his script at all.  Mine was on my lap, though I managed to make it through much of the scene unassisted.

Very shortly, all this angst about learning lines will be behind us, as we divest ourselves of the scripts and begin to add new and magical layers to this theatrical cake called A Christmas Carol.
Email Post