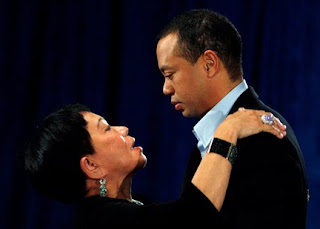 Tiger Woods gathered friends, family and associates in a cloistered hotel banquet room today to somewhat publicly apologize for his indiscretions. In the front row was his mother Kultida, Amy Reynolds from Nike and Kathy Battalgia of Tiger Woods Enterprises, all looking sullen, bruised, pained.
The legendary golfer's world imploded after a car accident in his front yard alerted the world's media that something was not quite right. After an attempted silence, reports of his dalliances began streaming in from all strata of society, from low paid waitresses to high class prostitutes. He finally spoke up via tigerwoods.com, admitting that mistakes were made and that he would be putting his golf career on hold to focus on repairing the damage done to his wife and family.
We learned today that he has been in therapy, trying to come to grips with his failings as a human being. We also learned that he has returned to his Buddhist practice, from which he had definitely strayed during his ascendancy to the summit of popular culture.
The money, the fame, the unparalleled access to every conceivable temptation, almost destroyed this golfing phenom. Now he faces the arduous task of atonement and rebuilding a reputation that has been shaken to the core.
As he finished his nearly 15 minutes of contrition, Tiger came out in front of the podium and hugged his mom. I was in tears, incredibly moved by what I viewed as incredible courage.
February 20, 2010 - 194.8 pounds, 25.6% body fat
Email Post