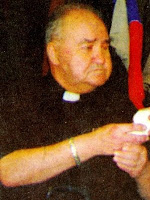 I got the news early this morning from my mom that Fr. Moriarty had taken a turn for the worse and was not expected to make it through the night. Fr. Moriarty, then Mr. Moriarty, was my high school English teacher who instilled in me the love of words and language.
He was different, quirky, at times outlandish. The desks didn't live in rows in his class, rather they formed a circle along the walls, creating a space for vigorous discussion and exhortations.
I had been prepped by my brother, two years my senior, to expect something peculiar on the first day of studying Hamlet. Sure enough, Mr. Moriarty came barreling into the room, rolled up the legs of his trousers, pulled his dress shirt out of his pants, mussed up his hair and began playing out the madness of the Prince of Denmark. We laughed and got the full sense of what those who had gone before us had loved about this extraordinary teacher.
The most dreaded assignments in grade twelve were Mr. Moriarty's "mode essays". They were deeply feared for two reasons: he was universally known to be stingy with A's and you had to plan the essays in advance and write them from memory.
The day we settled in our rotunda of desks for the first of the essays, Mr. Moriarty, as we were told he would do, left the class while we did our writing. Almost every single student pulled up their sleeves and pant legs to reveal all manner of cheat notes, frenetically scribbling to beat the band -- I was of the small minority who did not.
I did an incredible amount of reading and writing in grade twelve, studying till late at night, loving it. I was a good student, consistently third in academic achievement behind Susan and Lillian. The day we got the results of that first mode essay stands on high as one of the most memorable moments of my life.
Mr. Moriarty had a tradition about passing out test scores and essay results. Sitting in one of the student desks as part of the circle, he would call out the student's name and you would have to get up and retrieve your results. For those less luminescent students, picking up your paper would include a painful facial expression or snide comment from Mr. M. One by one on that incredible day the students were called up to get what turned out to be a whole lot of bad news until there was only one essay left.
"I'm going to do something that I've never done before," he started. "It was an absolute pleasure to read this essay and it is my honour to get up and deliver it." He got up, came right over to me and placed the paper gently on my desk.
During my twenties and much of my thirties I lost my thirst for words and writing. Now 42, reading and writing have become two of my daily passions. Thinking of Mr. Moriarty this morning, I realized that my love of language and appreciation for the power of words is rooted in that circle of learning he created. He was a teacher, among the best, and if he should pass this night I wish him an eternity of blissful rest.
February 3, 2010 - 194.6 pounds, 26.6% body fat
Email Post
Labels: Hamlet Mr. Moriarty