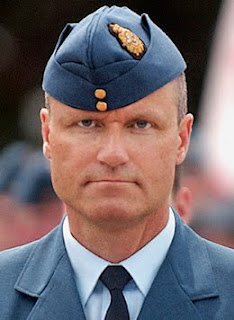 His eyes are piercing, black pearls set in a chiseled face, hard, rigid, unforgiving. He is Colonel Russell Williams, former commanding officer of CFB Trenton, Canada's largest and most critical air base. In one moment, a respected and decorated military leader, in the next, an apparently brutal sex predator and an accused double murderer.
My sister and family live in the southern Ontario military town, where the shocking news of the February 7th arrest of Williams has dominated table talk for the past several weeks. The base has quickly provided counseling in the after shocks of what has been a devastating earthquake to Canada's military complex.
If you're not familiar with the story, I would recommend reading the comprehensive report in the February 22nd edition of Macleans -- The Secret Life of Colonel Russell Williams. Essentially, this quiet husband and 23-year officer led an apparent double life going from officer to monster effortlessly. There are several allegations that he broke into the homes of unsuspecting women, tied them up and sexually assaulted them. Two women are dead, allegedly at his hand.
The disturbing thing in all of this is that this man has been through rigorous screenings and background checks to join the upper echelon of the Department of National Defence. If, in fact, he is guilty, how did he manage to navigate the waters between two disparate lives? How did an apparent psychopath climb the military ladder absolutely undetected? These are questions that must be causing sleepless nights for military brass and the politicians who sought the counsel of this silent monster, just weeks ago.
February 21, 2010 - 195.2 pounds, 27.9 body fat