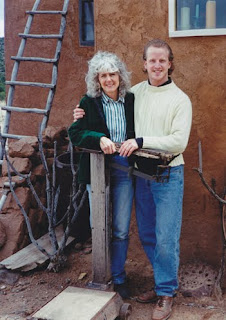 If there is one definitive thing that my upcoming trip to Albuquerque, New Mexico will accomplish it is a new found ability to properly spell the name of this incredible city. I would bet that if you were to put ten fully educated adults in a room and asked them to spell it, nine out of those ten would fail miserably--it's a doozy. I'm going to toggle over to Google to see if I got it right.
(insert pause here)
Yup, got it right.
I'm going down south for the annual NCMPR conference, or the National Council for Marketing and Public Relations for two-year colleges. I had been in that neck of the woods back in mid 90's. Happy go-lucky and single, I drove from Drumheller all the way to Casper, Wyoming on the first day, then on to Las Vegas, New Mexico on the second, just short of my destination. Overcome with a fever, I grabbed the first motel room I could find and made a beeline to the nearest pharmacy to dope myself up and sleep it off.
I woke up early the next morning, Easter Sunday, 1995, and found myself having breakfast in an empty diner run by a former Colombian drug lord. He and his wife, along with many children, made me feel completely welcome and prepared a most unforgettable Easter Sunday breakfast.
Sufficiently suffuncified, I drove on through Sante Fe and up into the Bandelier National Forest and the small community of Ponderosa, about an hour north of Albuquerque. I was staying at what was then known as The Outpost, a bed and breakfast run by a radio personality named Katy Bee. We had known each other for years, over the phone but never in person, as she did a daily call-in feature called Nashville Newsline on several radio stations I programmed in those days, Q14 in Stettler and Q91 in Drumheller. I've tried to find her in recent days on the inter-web but to no avail. She was in her late 40's or early 50's at that time and would definitely be retired now. That's her in the picture above with a much younger (and hairier) me.
I stayed in a small cabin set back in the hills with a wood stove, no power, deep silence. It was incredibly peaceful and provided a great base camp for trips to Los Alamos, Bandelier National Monument, and Pueblo Bonito at Chaco Canyon, just south of the four corners marking the meeting place of Colorado, Utah, Arizona and New Mexico.
Memories of pinon nut coffee, fine vineyards, rolling hills, warm hearted people and a brilliant star-filled sky descend from the recesses of my mind as I near the departure day. It'll be nice to be back in the land of the Anasazi after 15 years!
March 9, 2010 - 191.0 pounds, 25.6% body fat
Email Post