The Tower of the World 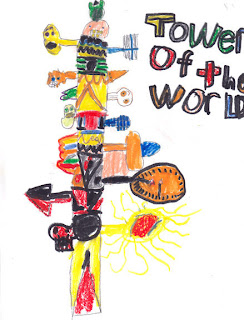 I was sitting at the computer in the family study, uploading hundreds of pictures from last month's Starfish Circus camp to our family photo site (http://russellthomas.phanfare.com/), as Ben quietly began work on a drawing at the desk behind me.
"This is going to be for Tiffany," he said. "I'll give it to her the next time I see her."
Tiffany has become a regular fixture in our lives, absolutely adored by Ben and Dylan. She arrived in our community back in November from the Allenberry Playhouse in Pennsylvania, where she worked as an actress and costume designer. Originally from northern California, Tiff is married to Claude, our Executive Director for Events Wood Buffalo. Together, they have stepped in to help with the boys on more than one occasion, and are a welcome presence in our lives.
"How's it coming?" I asked, swinging around to see Ben's progress.
"Almost done," he said.
Ben has acquired many of the creative genes that swim throughout the genetic pool of the Dore and Wagner families. Neil, Vincent, Pierre, Douglas and many others in our respective clans have natural artistic talent. Without prompting, Ben will spend hours creating intricate towers from wooden blocks, with incredible symmetry and complexity. He will gravitate to a piece of paper just as naturally as a television or video game. He plays for hours with various characters and set pieces that comprise a world as imaginative and lush as you can imagine.
Ben emulates the solitudinous side of my brain that is completely comfortable being alone for long stretches of time. I would spend entire afternoons slowly exploring the willows along the Assiniboine River, not in a particular hurry to do anything or be anywhere, rather living in the moment. Ben is his own best company, a quality that will provide solace and solidarity of purpose in what promises to be an interesting life.
March 21, 2010 - 192.6 pounds, 27.6% body fat
Email Post