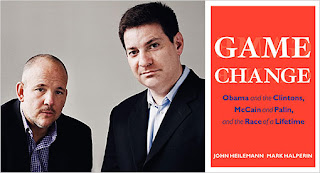 That I knew I would write today's Middle Age Bulge blog post on Game Change was obvious the moment I finished the book's final page and closed the cover.
"Wow!" I mumbled to myself, a little out of breath.
Written by John Heilemann and Mark Halperin, Game Change captures the political race of a lifetime and the eventual election of the first African American as President. It was a watershed moment for America and the world and captivated billions around the globe. And while this publication could be considered a history book, meticulously researched through unparalleled access to the people who witnessed things from behind the veil, Game Change is a story of people. It captures their capacity for greatness, their indiscretions, their human frailties, and ultimately, their very personal contributions to what became the most dynamic political period in memory.
So, what are the impressions that I'm left with, the echoes that will reverberate in my mind about Game Change?
It is clear to me that the most presidential person ended up in the White House, the one with the greatest character and the capacity to lead a nation and world.
I'm not sure how to say this nicely, but the fact that Sarah Palin came within a million miles of the White House is frightening. The word "clueless" keeps popping into my head -- pretty, folksy, and maybe even charismatic, but dumb as a sack of hammers. The poor woman couldn't explain why North and South Korea were separate nations or who attacked America on 9/11. When asked about her foreign policy experience by Katie Couric, her answer, aptly spoofed by Tina Fey on Saturday Night Live, essentially was that "I can see Russia from my house!" The fact that she has sold millions of copies of her story, Going Rogue, and that she is emerging as a potential name for the top of the GOP ticket in 2012 is sad, profoundly sad.
John McCain is a crass old soldier, whose tendency to spout off expletives with a complete lack of restraint, makes him very unpresidential in my books. Thank goodness he didn't win. He has a much more appropriate role to play in the Senate, and traveling around the world in a senior diplomatic role (according to his regular Tweets).
John and Elizabeth Edwards? What can I say, they pulled the wool over everyone's eyes. How they managed to get so far without being undressed as a couple of phonies is astounding to me. I remember rooting for Edwards like it was yesterday, which makes the reality of his character or lack thereof that much more disturbing.
And while the Clintons were painted as the flawed human beings that they are, there is no question their tenacity, passion for public service, and record of leadership will live on long after the fun and games of this campaign are forgotten.
If anything, Game Change pushes back the curtain on what was an incredible period of time, giving the reader a front row seat, right next to the fly on the wall. An outstanding read.
March 27, 2010 - 192.6 pounds, 27% body fat