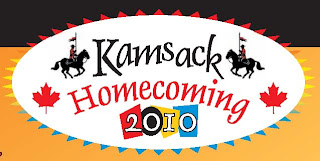 I arrived home from work to find my son Ben perched on top of the kitchen counter, phone cradled to his ear in an animated conversation with my dad. He had called to tell me "the good news" that my picture had appeared in this week's edition of the Kamsack Times, right there on page two, alongside a story about my Wood Buffalo Big Spirit Award, graciously accepted during the recent Fort McMurray Tourism Gold Star Gala.
It turns out that my dad had taken a printout of the story that I had emailed my mom to share with his buddies at the Senior's Centre. He showed it to William (Bill) Koreluik, longtime reporter and photographer for my hometown paper, who expressed an interest in running a story on the accolade I had received.
Two things are significant for me: first, that it was Dad who shared the story with Bill -- I assumed it had been Mom; and second, that there was even an interest in sharing a story that had happened so far away and to someone who had moved away from Kamsack over 25 years ago.
I've always been in awe of the Kamsack Times and the ubiquitous Mr. Bill, and the role and impact that he has had on our small farming community in eastern Saskatchewan. Over the past 30 years, possibly more, he has captured the story of a town and its people, the story of my family and of me.
Bill was there when I sang "It Came Upon a Midnight Clear" during the Assiniboine School Christmas concert in 1975, shining a flashlight in front of my face to create this angelic glow. He was there as I sprinted the final one hundred metres at the end of 1982's Terry Fox Run. He was there as I played Dr. Van Helsing in Dracula as my high school drama swansong.
A generation has passed and Mr. Bill is still telling the story of Kamsack and those of my parents, my brother and his wife, of my neices and nephews--capturing the images that create the memories that become the history, the public record of a community. And while big time newspapers are teetering perilously on the edge of the fiscal abyss, small town newspapers will remain, stoic, constant, comforting--at least I hope so, because I can't imagine a Kamsack without the Times.
March 25, 2010 - 193.2 pounds, 28.5% body fat
Email Post