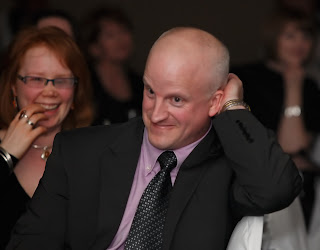 It is both intoxicating and awkward receiving accolades like last night's Wood Buffalo Big Spirit Ambassador Award--intoxicating in that I've been overwhelmed with congratulations and best wishes from friends, colleagues and family; awkward in that it's a little discomfiting to be singled out among so many wonderful contributors to the Big Spirit that defines us.
I love the image that photographer Sean McLennan captured, shown above, for several reasons. Most importantly, it has Heather in it. Having her with me last night meant everything. You can tell she's enjoying the fact that they successfully kept things completely secret. She has a proven track record of being able to take me by surprise. The picture also captures the moment when I've fully figured out Mayor Melissa Blake was talking about me. As soon as she mentioned the OK Radio Group and interPLAY there was no question as to who was going to be up on that podium needing to say a few words in just a few moments.
"Oh my God," I thought to myself. "What do I say?"
I think it was at that point when the moisture started to pool on my sparsely populated head of hair. Normally I put a lot of thought and preparation into the words I say in front of an audience. So, as my name was called and I bounded up to the stage I became decidedly nervous and hopelessly inarticulate.
Looking at this picture and my sheepish grin, I am reminded of my six year old son Ben. Up until now I thought his peculiar grin was all his own. Maybe not.
March 8, 2010 - 192.00 pounds, 27.2% body fat