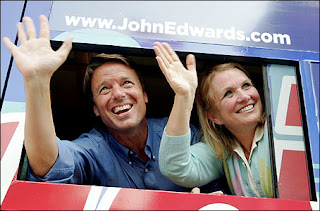 I am slamming through Game Change by John Heilmann and Mark Halperin like a hot knife through butter. Not only are they telling a great story, they are making extraordinary use of language. I like nothing better than sitting in my favorite spot on the sofa with the dictionary close by to look up luscious words like perfunctory, evisceration and cognoscenti.
Reading about the outrageous John and Elizabeth Edwards, complete with their pretentiousness and proclivities, or the sometimes tepid and always tempestuous Clintons, I'm reminded of the eloquence and literary genius of Pat Conroy (Beach Music, Prince of Tides). He, too, told tales using amazing word choices.
I started reading voraciously about ten years ago, soaking up hundreds of novels and countless non-fiction pieces, returning to some of the best ones several times over. The use of words soaked into me and splashes out as my blogs or stories spill out from my brain, through the keyboard and on to the screen. Sometimes a word slips into a sentence that just seems right, although its definition eludes me. Nine times out of ten, a quick trip to the dictionary or a Google word search confirms my choice as being bang on.
I started a list of great words in an unfilled journal a couple of months ago. Here are seven entries:
ephemeral, adj - lasting or of use for only a short time, transitory
bifurcate, adj + verb - forked, branched or divide into two branches
divagation, noun - a literary digression
ubiquitous, adj - present everywhere in several places at once
denizen, noun - an inhabitant or occupant
paroxysm, noun - a sudden attitude or outburst
mien, noun - a person's look or bearing
The interesting words leap off the page and grab my attention, incidentally, so do errors. I think I caught one in Game Change. Tell me I'm wrong.
But she had decided to ignore all that, to disregard the risks, because of Solis Doyle's signal virtue: a loyalty so fierce that she would run through a wall for Hillary. (Game Change, p. 182, paragraph two)
I'm thinking that "signal" was supposed to be "single".
And though it's only my opinion,
I may be right or wrong,
You'll find them both
In the Grand Canyon
At sundown.
Bob Dylan, Last Thoughts on Woody Guthrie
March 23, 2010 - 191.6 pounds, 28.3% body fat
Email Post