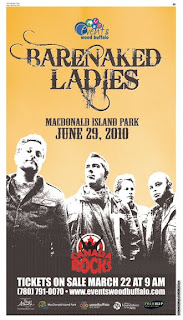 The new Barenaked Ladies (BNL) released their latest album this week, All in Good Time, their first in the post-Steven Page era. I'm listening to it as I type this blog post, my 80 Gb iPod Classic plugged into an old set of surround sound computer speakers. The sound is remarkably good.
BNL was last in Fort McMurray in about 1997, performing in what was called the Flydome, a white inflatable structure puffed up just north of the Sawridge Inn & Conference Centre. The concrete pad it sat on is still there, hidden under weeds and piles of snow. I didn't go to that show but was in the Flydome for a number of different events. It had this airlock entry system that ensured it didn't deflate by accident. Eventually it was sold to the highest bidder, packed up and shipped south.
Tickets for Events Wood Buffalo's presentation of BNL on June 29 went on sale this past Monday. The show has the potential to unseed the Tragically Hip concert of 2008 as the largest outdoor paid concert in Fort McMurray history.
In the glittering pantheon of popular music history, many bands have weathered personnel changes and in many cases, emerged stronger on the other side of the vortex. BNL appears to be coming out of the storm with the All in Good Time being the second highest downloaded album on iTunes this week, just below the latest from pubescent phenomenon Justin Bieber.
Steven Page got slapped with a cocaine charge in the summer of 2008 and parted ways with BNL just over one year ago. He has since gone on to a solo career.
With substantial completion of MacDonald Island Park just around the corner, Canada Rocks with BNL moves on to the Island from last year's Snye Park site for what promises to be a great outdoor concert experience.
March 26, 2010 - 192 pounds, 27% body fat