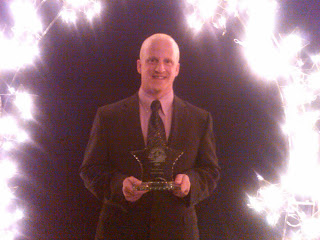 The proverbial wool got pulled over my eyes the last couple of days, as a whole host of folks conspired to get me out of the house and to the annual Fort McMurray Tourism Gold Star Awards. It's not that I didn't want to go, it was just that I had a full calendar and had just emerged from a crazy schedule in February. The thought of another night out of the house and away from my family just wasn't sitting right.
The first pitch came from Denise at Fort McMurray Tourism, the second from Renee in my office. Behind the scenes, the conspirators were getting desperate, as I was declining at every turn. But finally, at the urging of the boss and under the cloak of a fictitious award for Keyano College, I accepted.
This was my first chance to experience the Gold Star Awards and I was blown away. The room was filled with people who serve for a living, and the collegial atmosphere was infectious. As nominees were announced colleagues shouted and cheered in full support, and with the announcement of a winner they jumped to their feet. It was delightful and inspiring to watch and listen.
In reflection, what made this evening so memorable was the chance to shine a light on so many people who often go unheralded yet make such a difference in our community. From the waitress who always serves with a smile to the lady in housekeeping who strives for customer service excellence every day, from the friendly bartender to the hard working radio personality, these are the folks who are on the front lines of the big spirit for which our region is famous. It was lovely to see the looks of pride, satisfaction and dedication in the faces of all the winners and nominees.
I was at a rare loss for words as Mayor Melissa Blake announced that I was the recipient of the 2009 Wood Buffalo Big Spirit Ambassador Award. Previously won by Al Hancock, the Fort McMurrayite who climbed the highest mountains of each of the seven continents, I felt like I was in lofty company.
Alan Roberts, was quoted in the introductory speech as saying that I keep him busy with my contagious energy and infectious new ideas.
"He provides me with challenges that are hard to say no to" wrote Alan.
He shared with me an interesting fact after the ceremony. "They left out one word in parenthesis at the end of my quote. They left out the word dammit," he said with a beaming smile.
Standing up in front of several hundred well-dressed people, I was uncharacteristically nervous.
"This is way better than the Oscars," I said. "When I arrived back in February 1996 it was 43 below. As I came down the hill for the first time it was absolutely beautiful. The air was completely still, full of ice crystals, and the beams of the street lights rose right up into the heavens. I fell in love with Fort McMurray in that moment and I've been in love with it ever since."
I was humbled beyond measure to receive this award and very appreciative that my Keyano family and my beautiful wife Heather were there to cheer me on. I'm looking forward to showing my Gold Star Award to my sons first thing tomorrow morning.
March 7, 2010 - 192.4 pounds, 26.3 body fat
Email Post