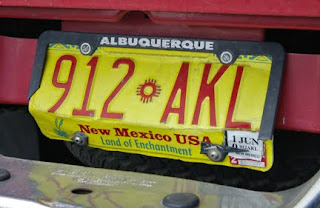 Walking around downtown Albuquerque on a Sunday morning reminded me of our early morning walks in Rome a few years ago: quiet, subdued, street cleaners methodically picking up the trash from Saturday night, vagrants trying to catch my eye. This is the "Duke City" where the new west meets the old west, where Mexico becomes New Mexico. It was named after the Duke of Alburquerque from Spain. Take note of the extra R. The first US Postal Service left it out by accident and the new spelling stuck.
I was driven to the hotel last night by a female cab driver. Originally from Maryland, she moved to Albuquerque when she was 18. I asked her about rumours of snow that we had heard coming in yesterday.
"Oh yah, we some some snow on Friday for a bit, very strange for us" she said. "But you know what they say about the weather in New Mexico, just give it five minutes and its bound to change."
I walked out for a stroll after a hearty breakfast of granola, cream and local syrup (Chris brought the last two ingredients out for me special) and basked in the warm southwestern sunshine. A half an hour later the clouds had rolled in and rain was falling off in the distance in the foothills of the mountains. Back in my 19th floor hotel room, the light is muted, rather dull, so much so I need the desk lamp on even with the curtains wide open.
This is the first day of the National Council for Marketing and Public Relations, a four day annual conference that gathers folks like me from two-year colleges across North America. It'll be a time of learning and reconnecting, a time to "renew, refresh, respond", so says the theme of the conference. I'm excited to begin.
March 14, 2010 - weigh and body fat % n/a
Email Post