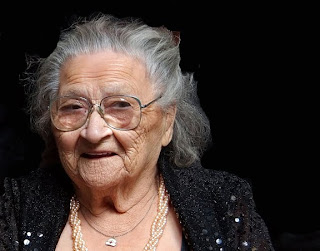 Jenny Flett left us early this morning. She was 101 years of age, and lived her final years as a resident of the Northern Lights Regional Health Centre. About one year ago she spoke to a captive audience at Keyano College as part of Aboriginal Awareness Day, just months after receiving an honorary Nursing Diploma on the occasion of her 100th birthday, answering questions about her many years as a midwife in Fort Chipewyan, Alberta's oldest settlement.
"I delivered almost 500 babies in those years," she told us. "I never lost a baby and I never lost a mother. God gave me a gift and I used it."
Feisty, articulate and with a memory still as sharp as ever, Jenny took us back to the old days when Fort Chipewyan was about as remote a place as you can imagine. Her reach was everywhere in that community, the connections too many to quantify, the emotional attachments too great to put into words.
As we gathered tonight in Keyano Theatre for a performance of Raven Stole the Sun by Red Sky Performance from Toronto, we paused for a moment of silence in remembrance of one of the most revered elders in Wood Buffalo. I hope the honouring silence reached up into the heavens and soothed her with its warm embrace.
March 2, 2010 - 191.4 pounds, 25.6% body fat