I Was Deaf But Now I Hear 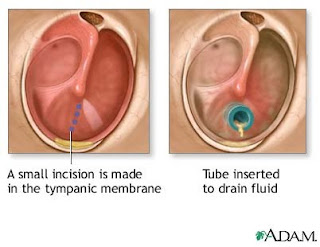 I was expecting a simple consult when I went for this morning's appointment with the ear specialist, convinced that any procedure would take place down the road and likely in the big city. Instead, Dr. Kudryk went right to work, first sticking a fibre optic camera up my nose to ensure there weren't any sinus issues causing the near total hearing loss on my left side. Then, he put a local anesthetic on my eardrum area before opening it up and sucking all the liquid out that had settled into the middle ear three or four years ago. Finally, he inserted a tube to allow things to drain on a continuing basis.
"You'll hear some scraping sounds," he said, as the tube found its new home inside my ear. "You should be able to hear a difference now."
And SNAP!, just like that, four years of silence on my left side disappeared and sound came rushing in. I was almost dizzy from the sudden auditory storm as my brain attempted to find its balance.
I was drunk with sound as I stepped into the car, in a kind of stupor really. Suddenly there were clinks, clunks, and whirs on my left where there had only been muted silence before.
I settled into my office chair knowing that I had a built-in metric for quantifying the change. For years I've had to have my phone volume between 6 and 8, sometimes higher, to be able to carry on a conversation. I picked up the handset at 6 -- way too loud. Then 5, 4, 3, 2, 1 and finally 0 before finding a comfortable volume. Wow!
Sitting here in my study writing the Middle Age Bulge blog I'm listening to Bruce Springsteen's Thunder Road, the volume nestled at about 30% -- it needed to be up near 80% just a few hours ago. Not only is listening in stereo a rediscovered joy, it's also lovely to hear the instruments and voices on that side of the left-right balance. Heavenly, there is no other way to describe it.
The cacophony of sound is a symphony I've missed so dearly. What a great day to be alive.
March 11, 2010 - 193 pounds, 27.1% body fat
Email Post