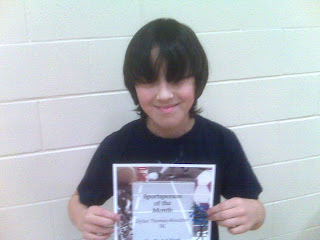 Dylan is reaching the age of my memory, the cusp between grades five and six, when I first felt the tingle of being older--childhood felt like it was behind me. It was 1977 when I was in grade five, the year Heather was born, a lifetime ago when Shaun Cassidy and Leif Garret adorned the covers of teen magazines and disco was the music inferno of the day.
I was thinking of how much things have changed as I attended assemblies at Dr. Clark School, one in the morning for the younger kids and one in the afternoon for the older ones. Today, they have this miraculous method of getting several hundred children to pay attention and be quiet: the Principal or Vice Principal raises his hand and all the little people follow suit until silence is achieved.
Back in Assiniboine School in Kamsack, Saskatchewan, the sounds of "shhhhhhh" would erupt from the mouths of teachers scattered throughout the small gymnasium. Mrs. Zipchian would cast her evil eye at the rowdy kids and the smell of fear would evoke a cryptic silence. In my day, if you were out of line you'd get a whack upside the head with one of those wooden chalk erasers or you'd be dragged out of the class and into the back storage room to get a few lashes with the dreaded leather strap. In the 1970's corporal punishment was embraced, celebrated, and practised without restraint. Today, they raise their hand without having to say or do anything else. I want to know who invented this bright idea so I can shake his or her hand.
Every month, students are selected as Reader of the Month, Music Student of the Month and Sportperson of the Month from each classroom. Today, both Dylan and Ben received recognition for being sportsmen, a proud day indeed. I don't remember recognition exercises like this 30 years ago, although the specific memories are foggy at best. Maybe they did these kinds of things back then, but sadly, it's the nasty memories that stand out in the cobwebs of my mind, punctuation marks in the transition from boyhood to manhood.
March 30, 2010 - 192.4 pounds, 27% body fat