The hospital is so quiet early in the morning, reminiscent of the many hours I spent here with Dylan as he went through his surgeries back in 2010 and 2008, blips and chirps muted off in the distance as we walked from the parkade to the surgical ward on the 5th floor here at the University of Alberta Hospital.

Everything began at 5:30 am as patients and their significant others and parents began arriving to get their allocated beds, the starting positions for myriad procedures that would take place starting at 7:20 am. Heather was in exuberant spirits from the moment she startled me awake to when I left her just moments ago, about to be wheeled into the operating room.  If anyone was ever in the perfect headspace for surgery, she would be the poster child: joking, smiling, making friendly with the nurses and doctors.

This is her first major operation, and apart from being put under for a procedure when she was a kid, it's her first time being knocked out and operated on.  I'm grateful that she was feeling like a kid at a carnival.

You can say what you like about social media, but I'll say that the outpouring of prayers, well-wishes, and positive energy through this medium (especially via Facebook) has made a profound difference.  Every single kind word, pleasant thought, and offer of support has been seen, felt and absorbed.  Heather's optimistic outlook and delighted anticipation this morning has been partially inspired by all of you. 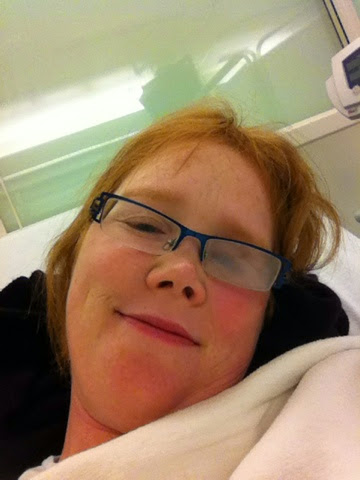 There was a strange matter-of-factness with the scene, as we sat there listening to the gaggle of medical professionals prepping for what looked to be 10 surgeries about to take place.  They talked of golf tournaments, medical issues and whatever else popped into their minds; they greeted each other cheerfully - another regular workday (for them) was about to begin.  I felt like an interloper, the only non-patient in the holding area just outside the suite of operating rooms, apart from a father or grandfather, comforting a young child in the spot right next to Heather.  There was no drama, stress, angst or concern.  It felt like another day at the office: routine, pleasant and serene.

Heather is expected to be in surgery for 4 hours or so. She anticipates spending much of the day sleeping, groggy from the meds and what her body and brain are about to endure.

I'm down at the coffee shop, enjoying a light breakfast, coffee and time with a strong WiFi signal.  I can catch up on some work as the doctors do their magic.
Email Post