They come from all over the world - Italy, France, Argentine, Chile, Mexico, USA - to attend Mindcamp, Canada's creativity conference.  We flew out of Fort McMurray to Edmonton, then Edmonton on to Toronto.  I spent much of the trip reading the latest edition of the New Yorker, long articles about an American political operative in Russia, the strong character of Nina Simone, and a piece written by Malcolm Gladwell: "The Crooked Ladder", the criminal's guide to upward mobility.

Eventually I got tired of reading and started drawing, something to pass the time. Two sketches emerged in the final hour of the journey to TO. 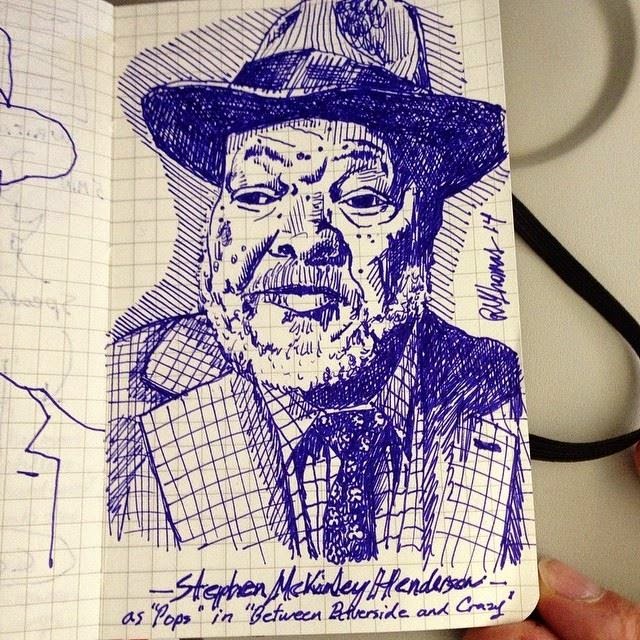 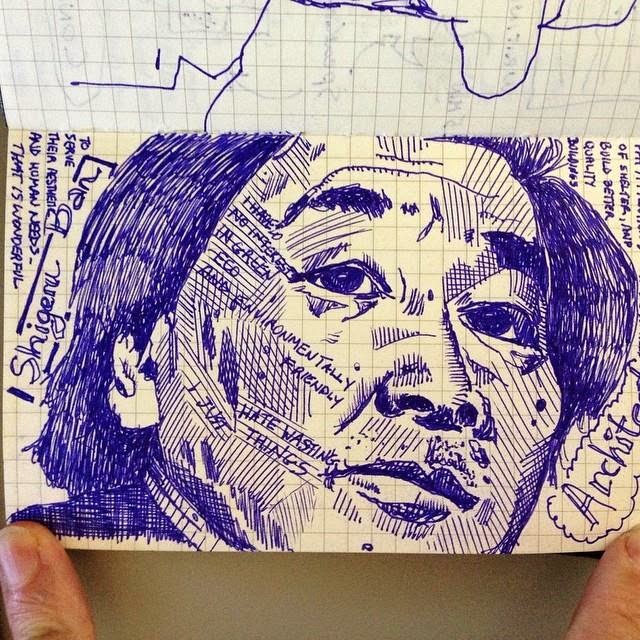 Dylan, being a banana (one of about 10 helpers for the conference), was required to be in the city a day earlier than the regular attendees (like me). They were all convening at Tim and Franca's house to make sure all sessions were covered and that the team had a chance to get to know one another.

A few of us non-bananas joined in a great memory game where you form a circle.  Everyone puts up their hand.  One person says the name of a vegetable (for example) and points to someone, who drops their hand, says the name of a different vegetable and points to someone else, and so on, and so on.  The point of the exercise is to remember two things: the name of the vegetable you suggested and who you pointed to.  You run through the circle a number of times, before started a new round with, say, animals.

Eventually, we started doing both of them at the same time, and eventually added a third physical component of crossing the circle, bowing to someone, and taking their spot while they went and bowed to someone else.

Sound confusing?  It was.  But by the end of it, we sure knew each other better.

Dylan and I stayed at an Airbnb basement suite last night.  The cost was $95 for the night and offered private parking, a kitchenette, queen sized bed, and lots of room.  I was a little skeptical when initially making the booking, but this turned out to be a great spot at a very reasonable price.

Today we leave for Mindcamp, which is once again happening at YMCA Geneva Park north of Orillia on the shore of Lake Couchiching.
Email Post