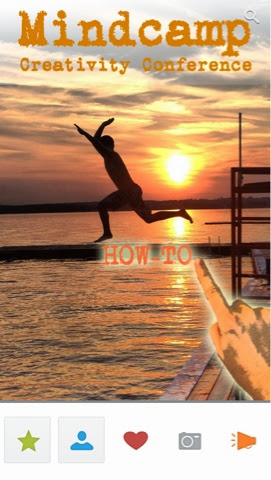 We arrived at Mindcamp before everyone else -- always the early birds.  Dylan and I walked around the facility, YMCA Geneva Park, just a few minutes past Rama, a small First Nations community and home to Casino Rama, one of the largest and most popular casinos in Ontario.

Cloudy and cool, we quickly found ourselves heading back to the rental car for our hoodies.  That's when I discovered that I must have left mine back at the Airbnb spot in Toronto.  So, as soon as Branwen showed up (head Banana), I left Dylan in her charge and went off in search of something warm to replace my newly orphaned sweater; I was also in search of salad, as the clock had struck noon some time earlier and I was famished.

As soon as I saw the looming building of the casino I realized that was probably my best bet for getting both sustenance and something to wear that would cut out the chill. Otherwise, I would likely have to drive all the way back to Orillia and I really didn't want to do that  I enjoyed a lovely spinach salad in the casino hotel restaurant before going on a search for a sweat shirt.

"Can you perhaps help me?" I asked the overly large security guard, standing watch at the entrance to the casino.

"Does the casino sell any souvenir sweat shirts and that kind of thing?"

"You bet," he said. "Straight ahead, in the centre of the casino, is Biindegan's; they'll have something."

He was right, they had one rack of deeply discounted sweat shirts.  I managed to find one in my size in black, with only a subtle brand on the left chest.  I'm not an ardent fan of casinos in general, and certainly not of Casino Rama in particular, and didn't want to give off that impression.  I was happy though; I got my warmth for about $25.

Walking through the slough of slots, I couldn't help but sit down at a 25-cent one and offer up my solitary $5 bill, followed almost immediately by his $20 cousin.  Within 5 minutes I had reached the limit of my gambling investment and was in the final 10 credits of life when something went right, then went right again.  In one press of the button I more than doubled my original credit total of 80 and cashed out.  I was $15 to the good and decided to call it a day.

By the time I made it back to Mindcamp, lots of presenters had started to show up, familiar faces and names from two years of having attended this annual gathering: Steve, Jim, and Barbara; Francois from South Africa, Wayne from New Zealand, Joe from New Jersey and Alan from Georgia.

There is a distinctive kinship that develops after having been to Mindcamp, a bond or connection that is immediate.  It's a great feeling, one that makes it incredibly comfortable to be here.

I was excited to talk to Laila over dinner.  She has started a new clothing line with fabric that is custom made in Bali.  A gestalt psychotherapist by day, she is having a ball exploring her creative side through this new venture.  Check out www.LailaGoddess.com to see what she is marketing.

Inevitably, my iPhone come out so I could share my recent line of paintings with Jim, Joe, Laila and others who were sitting at the table.  The response was a little overwhelming, with admonishments that I'm selling my stuff for a fraction of what I should be and one suggestion that I shouldn't be selling them at all, rather turning them into t-shirts and signed prints.

"This needs to be making you money while you sleep," said Laila.

This is my tribe, and they sure know what to say to make me feel good, though I completely believe their reaction to the work was genuine.

Tim Hurson, one of the founders of Mindcamp, along with Kristen and a few others, encouraged us to reach out to the new people who arrive throughout the event.

"It's so easy to hang out with the people you know and are comfortable with," he said.  "I do the same thing, because I love spending time with all of you; I love you guys.  But make an effort to welcome everyone else and make a connection.  That's the power of Mindcamp."

I took his advice and struck up a conversation with 26-year-old Ignacio from Chile, a sociologist working with a major food producer from down there in the innovation division.  Even though he was communicating in a language that was largely foreign to him, he did a remarkable job articulating complex concepts. 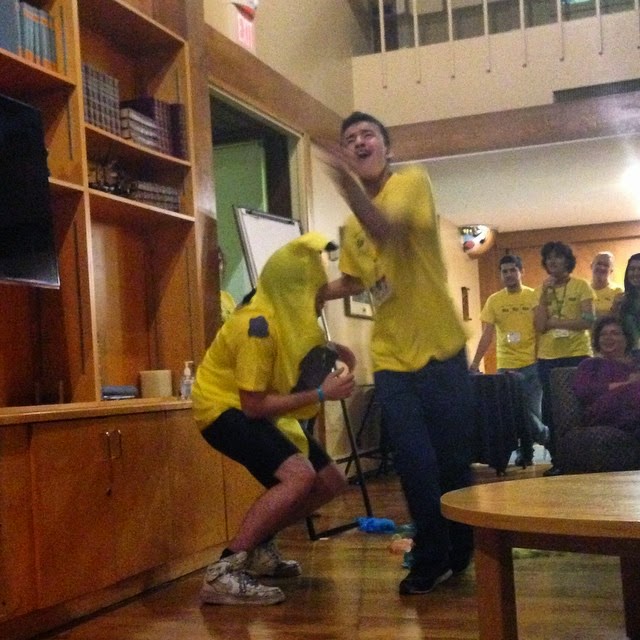 Dylan had a full day as a very busy Banana, the helpers who set-up sessions and offer assistance to everyone.  They were introduced yesterday evening, one by one, and performed a skit about how not to treat Bananas.  Dylan got right into it saying "I asked for regular fine-tipped pens, NOT Sharpie fine-tipped pens!", throwing the pens at the helpless guys dressing in the banana costume.

Pre-Mindcamp is in the books.  Today, all the rest of the delegates arrive and we dive into sessions that run from 7 in the morning to as late as 10 at night.  It's time to stimulate our creative brains.
Email Post