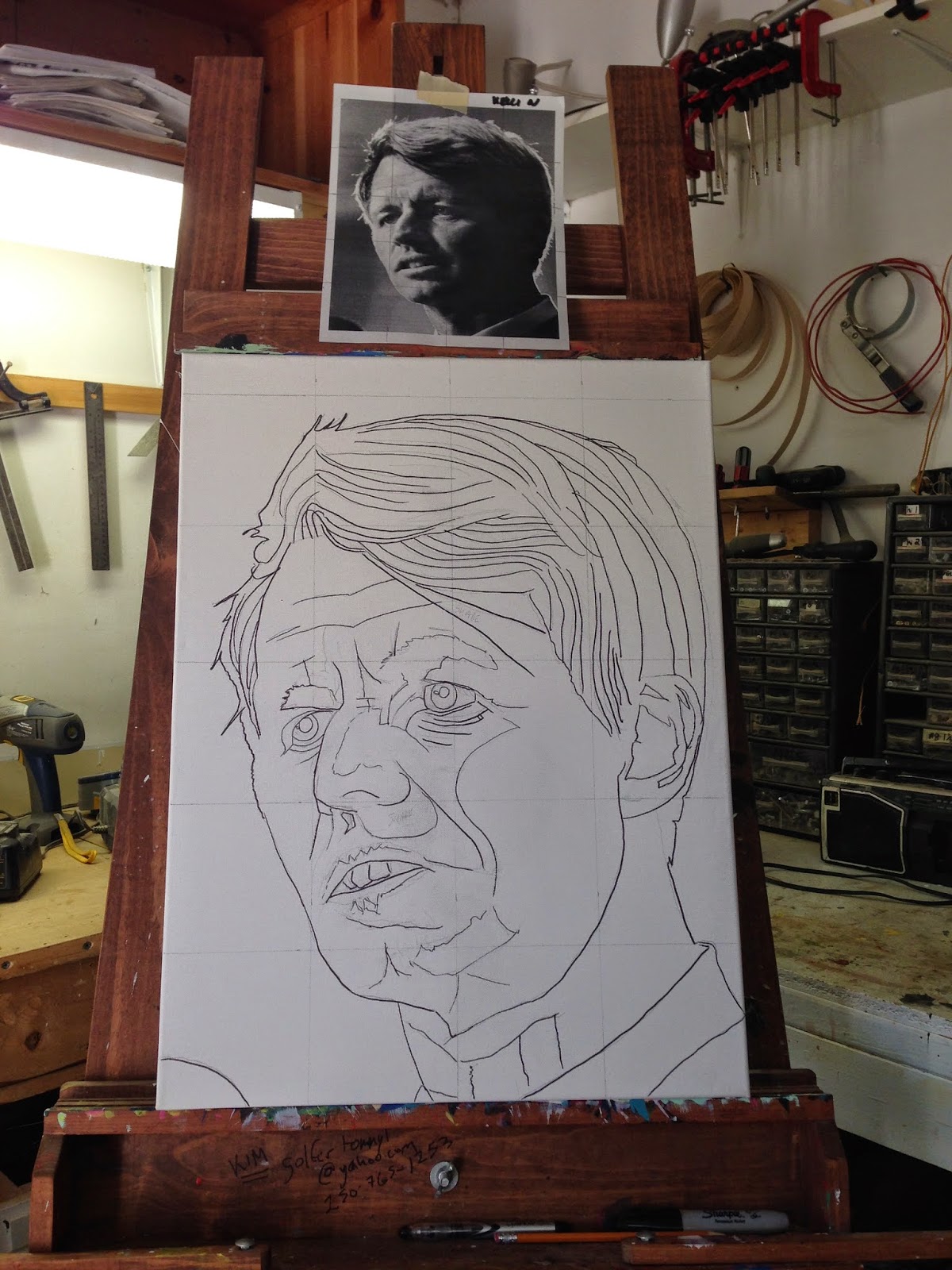 Before I paint, I draw.  Using a pencil, I sketch out the subject on the canvas to the point where the proportions and lines capture the essence of the human being.  After that I grab my Sharpie and seal the deal.

It took me longer than usual with the photo I had chosen of Robert F. Kennedy.  There are a number of things very particular about this fellow: the angle of the eyes, shape of the nose, and structure of the mouth and teeth.  All those pieces needed to be right or it would turn into an epic failure. 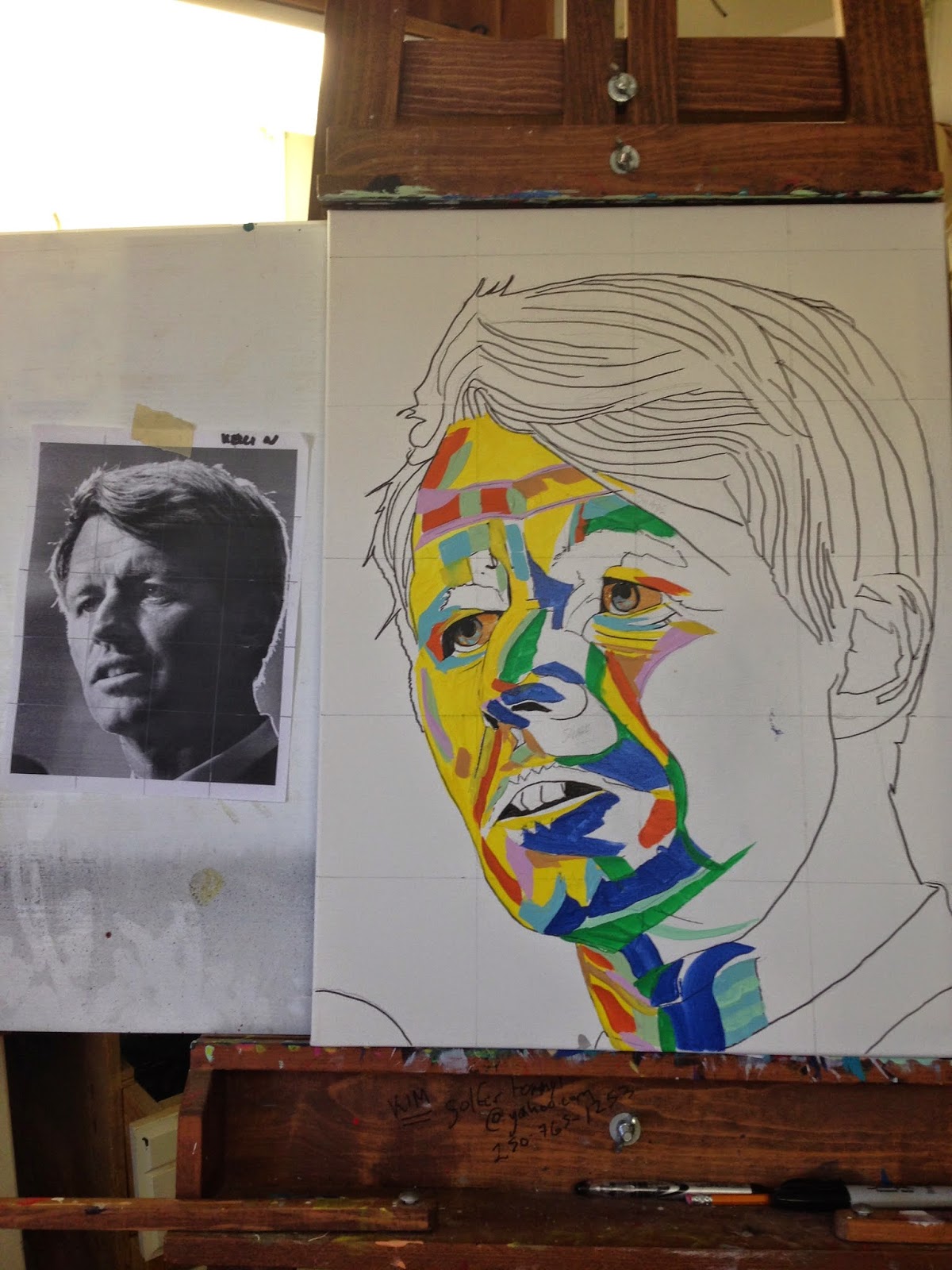 After a couple of evenings of penciling things out, erasing everything and starting again, I finally had what I considered to be a pretty good rendering.  Then I start painting, yellows first, followed by orange, light blue, light green, etc. 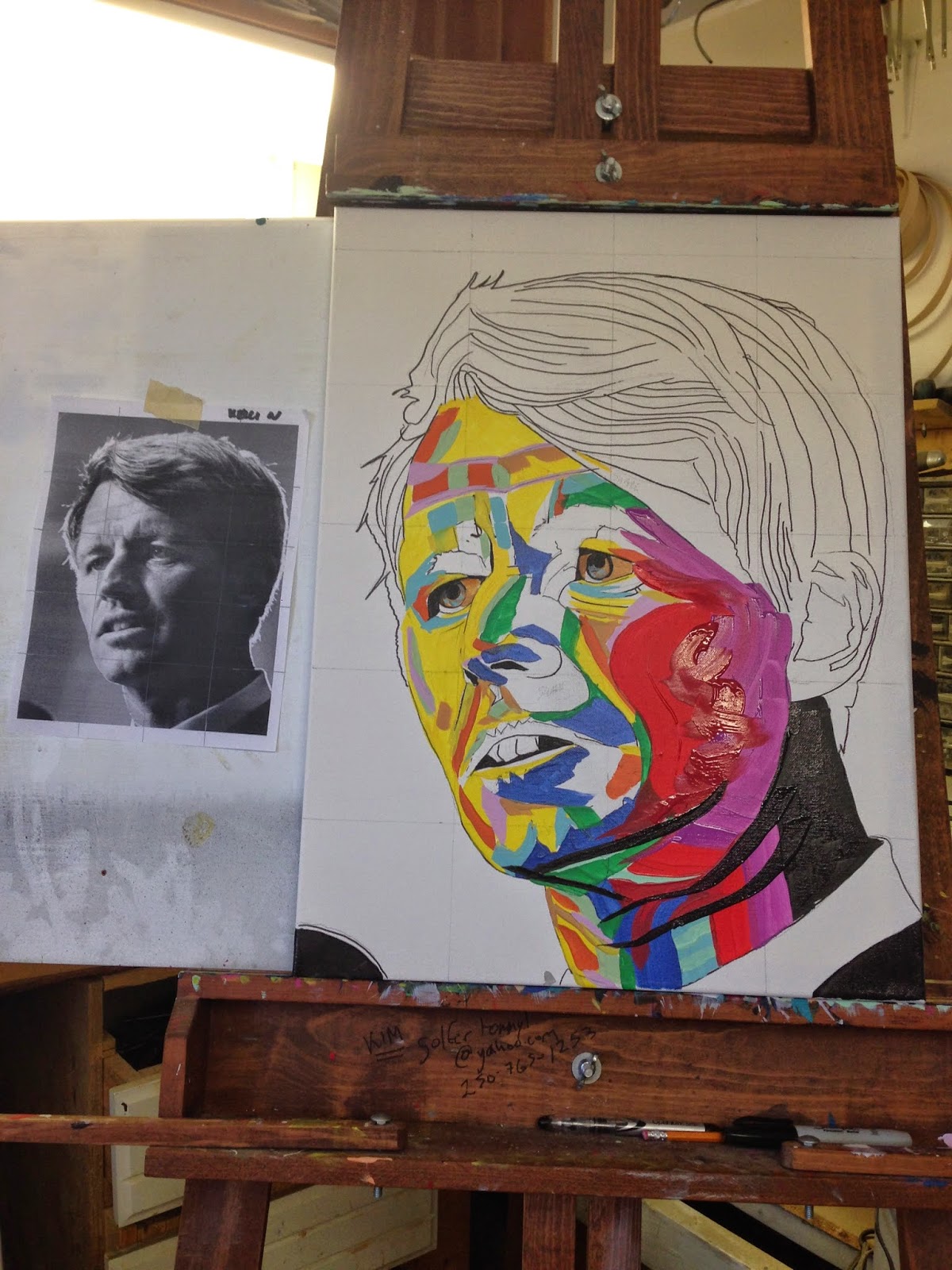 As I went along and through about 90 percent of the time spent painting, it felt like I had missed it, that Mr. Kennedy wasn't emerging from the canvas.  For the first time, in this two month stretch of painting, I felt like I might be grabbing the white paint and starting from scratch.  That was my frame of mind until about 140 minutes into the project when everything shifted. 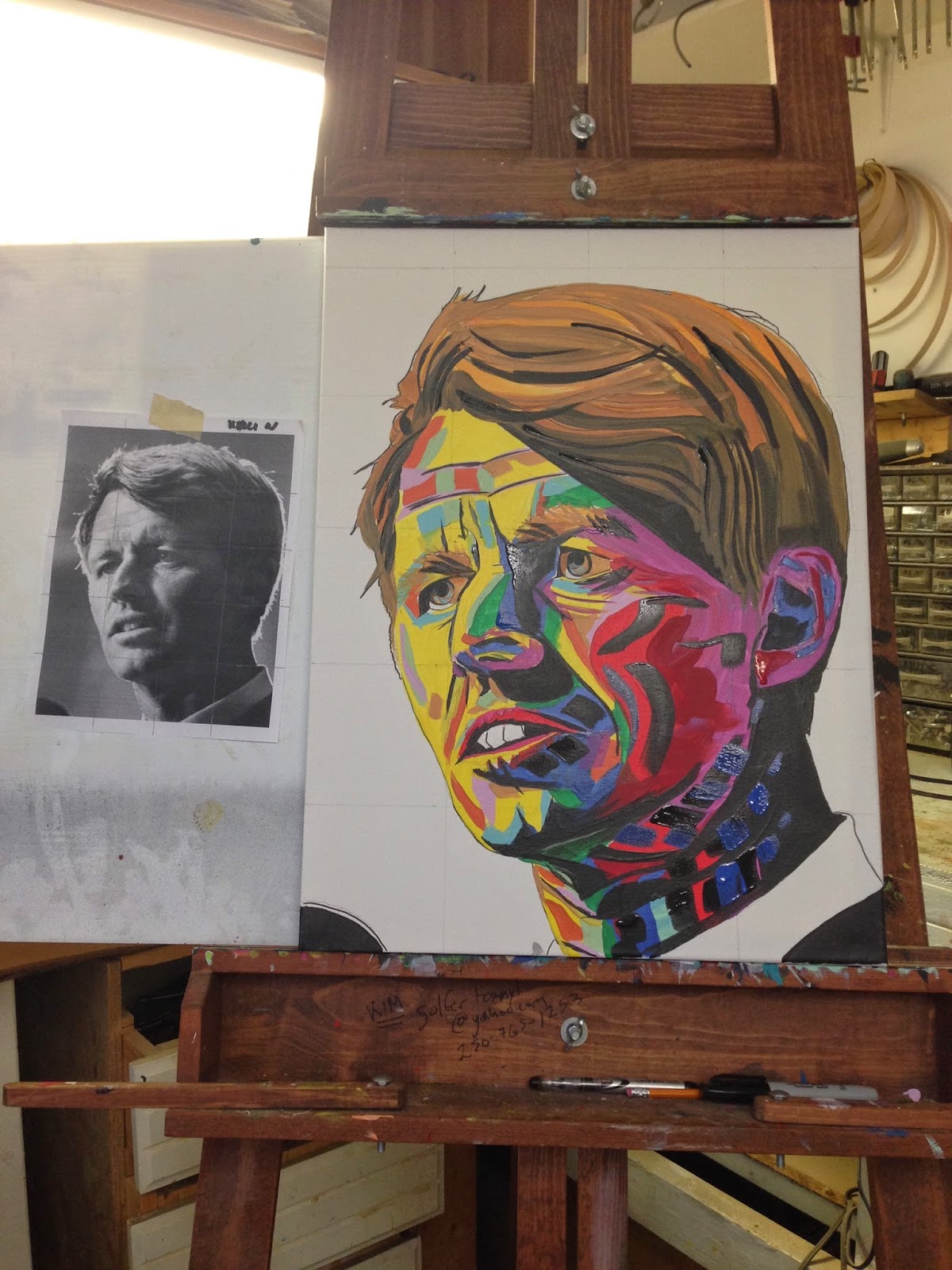 Two sweeps of paint forming the shape of his cheek and two dots on his eyes was all it took.  The Irish green background followed with about 15 minutes of wildly throwing and dripping paint on the canvas (place on the floor on top of an old election sign).  The result is pretty cool. 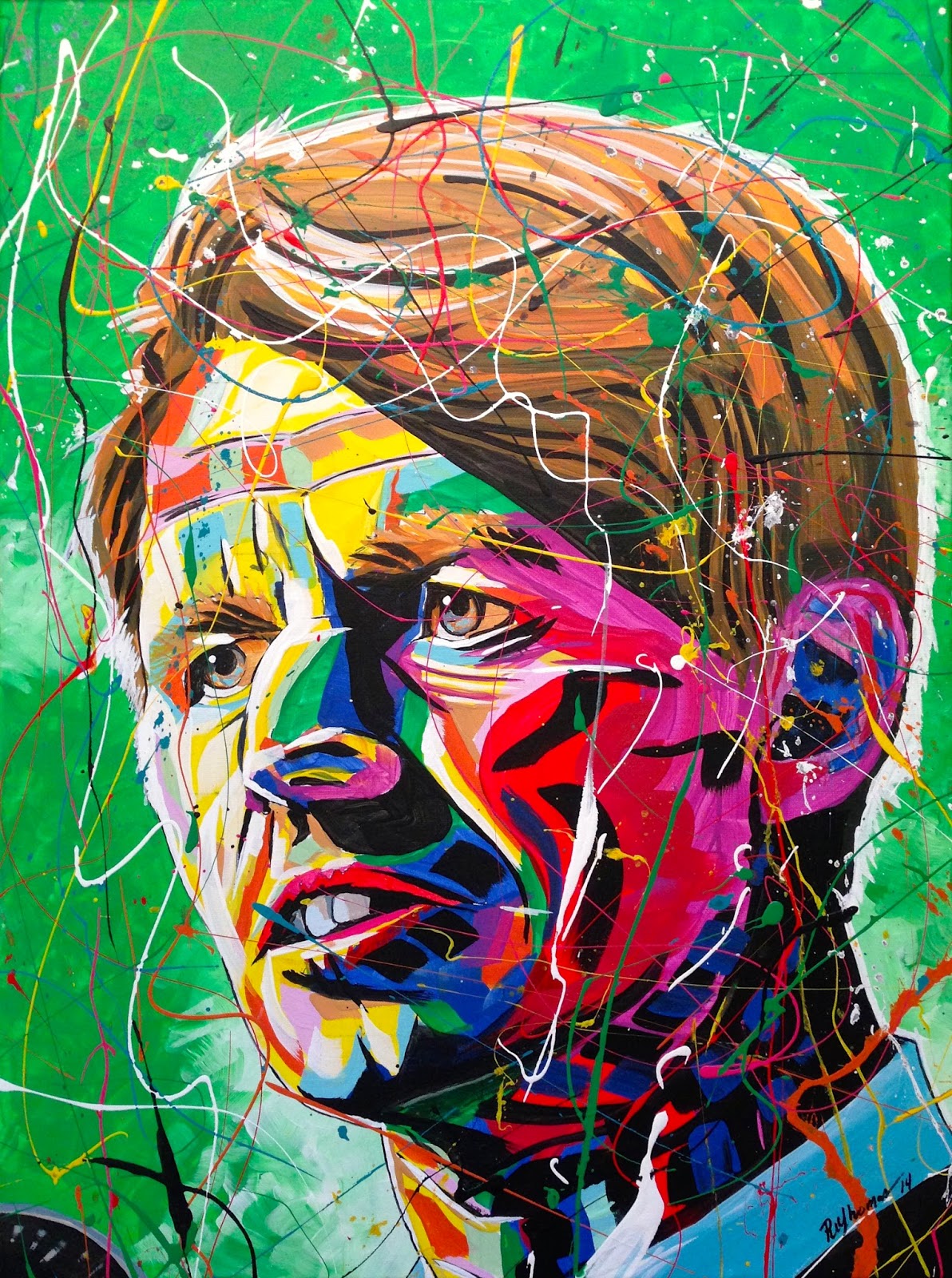 I trust the process that I've established with this new series, but I have to keep reminding myself.  If I follow four simple steps, the results are going to be interesting.

1. Pick a subject that "speaks" to me
2. Sketch it on the canvas to the point where the character is captured
3. Apply the colours
4. Do the splattering

With all the requests that have come in, I've started a wall in my shop/studio with 8.5" x 11" printouts of photographs taped up.  When I want to paint, one inevitably jumps out to me.  Who will be next? It's hard to say.  But as long as I trust the process, and my instincts, something rather unique will appear many hours later.
Email Post
Labels: Art portraits Robert Kennedy