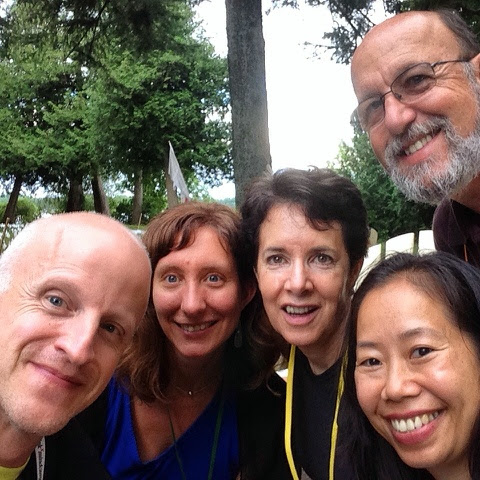 The regular attendees for Mindcamp started arriving Thursday, but not before we were able to participate in a tool sharing workshop.  It was broken into two parts: 1) ice breakers - activities to use at the beginning of a session, workshop, conference or day to spike up the energy and facilitate connections, and 2) additional tools that we can use in group sessions.

The Marker Name Game (suggested by Cora from Ireland)

I loved Cora's very simple marker game to get a moderately sized group familiar with named.  The person who starts holds a marker and says:  "My name is Russell. I'm holding the marker.  I'm now passing it to Nathalie."  Nathalie says: "My name is Nathalie.  I received the marker from Russell.  I'm now passing it to Leo."  Leo says:  "My name is Leo.  I received the marker from Nathalie who received it from Russell..."  In this way, repetition cements in the names of the people. (we did it in Cora's Friday session on coaching with a room full of 25 people and it worked brilliantly)

One suggestion to improve the game was to have everyone who has had a turn repeat the names, in unison, like a Greek chorus. It was a good improvement on an effective name memory ice breaker.

In this exercise you break off into groups of three.  Two of the people are interviewers, one is an interviewee.  The person being interviewed is a world class expert at something completely crazy like an eyeball hair remover expert, or a person who can identify the sex of a rat from a hundred yards out.  The person get interviewed by the two reporters.  They then switch until all members of the group have been in the hot seat.  Not only does it get your creative juices flowing, it would inspires lots of laughs and strong connections.

Symbols (suggested by William from USA)

I like this one as it is incredibly simple, yet opens up the channels of communication and innovation.  Each person in the group is given a blank sheet of paper and is asked to draw a symbol that is meaningful to them.  The symbols are then scattered on the floor or a table and mixed up.  Each participant goes to the pile and picks up one, and in turn talks about what the randomly selected symbol means to them.

There were so many more, but time is fleeting and I'll need to catch up on my writing post-Mindcamp.

There has been a lot of discussion about the first session that many of us attended about creativity habits.  Unfortunately, it devolved into an academic discussion about the words we were using, what they meant, and how they related to the topic.  The facilitator, Liz, did a brilliant job reacting to the debate that ensued and demonstrated great graciousness in allowing it to run its course.  Meanwhile, I did my best to follow it while drawing a picture.

Sleep comes heavy and immediately after a full day of Mindcamp. Day 2 arrived in a flash and began with Writing Freely, a session facilitated by Maggie Dugan, an American now living in Spain.  She provided a prompt and away we went with our 7 am creative writing fun.  I thought I would share the short piece I wrote to finish the statement "At the end of summer we always...".


At the end of summer we always assess, recess, shake off the habits and wisps of July and August, hot flashing storms, late mornings, and a carelessness that is not only encouraged, it is essential.  Warm mornings shift to autumn chill, sweaters get pulled out of the box and around our shoulders, reminding us that winter is knocking and that the leaves are about to turn to shades of burnt umber, smoky orange, and fiery red.  Sleeps comes easy as August gives way to her brother September, too easy and too long.  The nestling embrace of blankets is intoxicating, gripping, enduring.  Summer - wonderful summer - becomes an old friend waving off on the horizon, not to be seen for months, away on a distant vacation.  Some bemoan this shift; I applaud it.  The heat was nice for a few measures of the music, but the song really sizzles for me when the dance of autumn and winter begins.  Bring it on, I think to myself, bring it on.

I was sitting at lunch a few hours later when Vesna (from Canada but originally from Serbia) sat down and presented me with creative writing of her own, a poem she had crafted observing my drawing the previous day.  I was incredibly touched and will share it here.

I want to publish this while I still have a wifi signal, though there is so much more to write.  Unfortunately, every hour of every day has been filled with sessions, dialogues and experiences.  The only time for blog writing has been between 6:15 am and 6:45 am.  The challenge has been my connection to the Internet, which has been painfully slow and intermittent.  My missives from Mindcamp will need to be completed when we get home.